(Author's note: Today's post is a little bit rushed -- had a hell of a long day yesterday, and today's looking pretty busy as well. I would have liked to said more about Burkie and possibly Beauchemin; feel free to add your thoughts or memories in the comments. 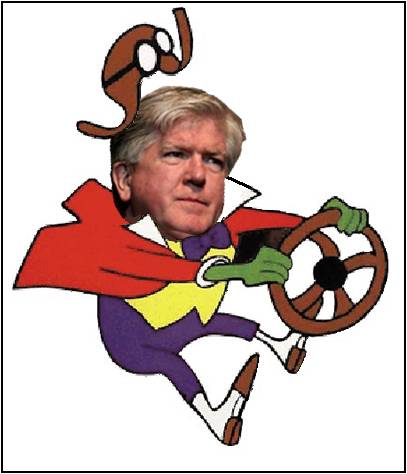 A week-and-a-half ago, our own SBN hockey blog leader James Mirtle, now doing a stint on the Maple Leafs beat or something, sent me an e-mail query about former Ducks GM Brian Burke:

Would you happen to have a list of the roster players Burke had when he landed in Anaheim? I'm sort of wondering what sort of mess he was in when he got there and if there are any parallels to what's happening in Toronto.

And was Murray his assistant GM from the get-go there? Maybe I'll ask him how they turned it around.

Nice -- coming to me instead of Barstool Bob  -- not sure what that last part was about. But it was something of an interesting question that did require a little research, as the early Burke days occurred before I was blogging.  BoC archives are awesome for when I want to verify memories from the last three seasons, but pre-blog memories are susceptible to decay.  So I hit up some dated Ducks publications to build Mirtle an early Brian Burke timeline -- what Burke acquired when he got to Anaheim and what significant moves he made immediately afterwards.  Here's the results I sent Mirtle after a night of light cramming:

June 05 - Samuelis purchase Ducks (look this one up, though).
6/20/05 - Brian Burke hired.
7/14/05 - Bob Murray added.
7/29/05 - Sandis Ozolinsh signed to a 2-year deal (was going to be a UFA), traded for Todd Fedoruk (cost a 2nd rounder to Philly).
7/30/05 - Drafts Bobby Ryan 2nd overall, Brendan Mikkelson the next round; trades Holmqvist to Chicago for Travis Moen (in a deal that nobody cared about).
8/1/05 - Randy Carlyle hired as head coach.
8/4/05 - Signs two Niedermayer brothers to four-year deals (was Rob a UFA? Seems he was somehow committed to Anaheim).
8/22/05 - After a lot of UFA activity has come and gone, signs Teemu Selanne to a possibly-PR pity deal.
8/23/05 - Having appealed to Anaheim die-hards with Teemu, trades away two favorites --Steve Rucchin and Mike Leclerc -- in separate deals for spare parts.
11/15/05 - After only appearing in five games, trades Sergei Fedorov to Columbus for notably Francois Beauchemin.
11/21/05 - As part two of the deal, grabs Todd Marchant off waivers from Columbus.
1/8/06 - Trades Petr Sykora to the NY Rangers for Maxim Kondratiev, who would barely ever appear in a Ducks uniform.
3/9/06 - In three separate trade deadline deals, trades away Sandis Ozolinsh (who then was in substance abuse or something), and adds Sean O'Donnell and Jeff Friesen.
Following Summer -- culls the Ducks of even more Europeans -- lets Ruslan Salei walk and deals away Vitaly Vishnevski after arbitration. Oh yeah, and Pronger.

Acquired by waivers: Todd Marchant, plus a weird incident with Chris Kunitz and the Thrashers.

So other than splashing on Niedermayer and lucking out on Selanne and Beauchemin, Burke didn't make sweeping changes to the roster -- he had a ridiculously full prospect pool and took steps to promote them up to the big club, later using the assets to land Pronger. That's got to be the main difference between Anaheim and Toronto, though -- their cupboard seems barer, and thus he's already resorted to trading picks instead of players. And Kessel's a nice player, but he's no Pronger -- I like how he spent our first-rounders better than what he's doing with the Leafs' first-rounders.

Incidentally, I did pick up this tidbit about Burke's first season in Anaheim -- started the year pretty mediocre -- 8-11-4 through the first 23, but picked up speed as the season progressed. At one point they won 9 of 10 in March, and finished with a 12-6-0 record in their final 18.

Hope all that helps,

Burke may be out of his element in Toronto -- I really can't say -- but he was for sure an excellent choice to help push Anaheim over the top.  He brought legitimacy and cockiness to a market that needed both, but ultimately I'm probably glad Burke left when he did -- seems he may be getting a little too free-spending on limited assets for my tastes.

Then again, with the awful play of the Ducks lately, perhaps we could use a little more Brian Burke out of Bob Murray.  One thing about Burkie -- he takes poor play from his team personally, and at times overreacts.  By the time the 2005-06 Mighty Ducks started 3-5-1 (same record as this year's Ducks), Burkie was already set to make some major changes -- the Fedorov deal happened not long afterwards.

This year?  Well, Luca Sbisa is done with the NHL for this season -- that's somewhat a change.  But by and large we're mostly just watching players move line-to-line; Barstool Bob hasn't really done much to shake up the team from its slumber just yet; we'll see how he reacts if on-ice problems persist.

For some bonus Burke coverage, here's some links back to the old blogspot site -- the "Burke Week" set of posts I put together when Brian Burke left for Toronto a year ago.

Yes, this was salary-necessitated, and yes, I’d rather have Andy Mac than Doug Weight on my team any day. Still, this needs context more than anything. As my quote above suggests, it wasn’t just a one-for-one trade; Andy McDonald was traded for Doug Weight + the tag space to keep Mathieu Schneider + the room to welcome back Scott Niedermayer + the room to later sign Teemu Selanne. The salary side sucked, I guess, but the Ducks by the end of that season had more than $24 million tied into three defensemen plus a goalie – a more expensive team than they could have afforded for a full season. As for success, yeah, there was no Stanley Cup, but in the 48 games after the McDonald/Weight trade (Scotty's return), the Ducks dropped nearly a full goal-against-per-game, and played on a pace that would have won them the President’s Trophy and the Jennings Trophy. Hard to be overly critical of a trade that transformed a .500 team into a top-tier contender.

Now again, I don't want to be misunderstood here -- I am thrilled that the Ducks are playing without Bertuzzi. It's so nice to know that everyone backchecks again, or at least pretends to. And while Morrison has been an offensive letdown early, I'd still take him over Bert anytime. But still, I'm not sure I like that Burke went the buyout route -- it's always struck me that buyouts are what rich teams do, and SoCal's Anaheim is not one of those teams. Burke has effectively spent some of next year's money on a player not in a Duck uniform, and that sort of future-spending should be off-limits for a departing GM.

Ducks Gameday—Burke Week #4: GM Lessons from a Cup Champ -- some of Burkie's strengths as a GM.

I can't think of one time Brian Burke didn’t righteously stand up for one of his players in Anaheim – no matter how stupid or how idiotic it was. It’s one reason Brian Burke is as hated as he is by rival fans, but probably one reason why players seem so loyal to him. Whether it’s Bertuzzi’s suckerpunch, Pronger’s elbows or skateblade, Selanneidermayer’s semi-retirements, or even softer stuff like Giguere dealing with his baby’s health – Burke is front-and-center deflecting criticism and supporting his guys. He’s done seemingly honorable things in waiving Bryzgalov and proving Giguere with a no-movement clause, and I think there's payoff to those moves -- I know players are loathe to say anything controversial, but I haven't heard any player critical of Burke, even guys who have left under tough circumstances (Penner, McDonald, Schneider, Bertuzzi). Whether or not fans like or dislike what Brian Burke has to say, it does seem that players do respond favorably to it, and I think that perception is helpful in luring free agents to sign or players to re-sign.

Basically, no matter his flaws and strengths, Burke was a high-profile GM and hockey personality, and he added relevance to the Anaheim Ducks. His coming to SoCal legitimized the franchise and fixed its focus on winning, and without that, the team's fortunes could have gone in a very different direction -- probably one without a Stanley Cup. There's definitely been some baggage to Brian Burke, but the upside has been pretty spectacular.

Yes, the Leafs are winless, and yes, just like Tom Benjamin this past weekend, that scares the living bejeezus out of me.  The last three games the Leafs have played, they've scored only one goal despite launching over 30 SOG in each game.  The last time the Ducks had three consecutive games with 30 SOG was last March.