Ducks Gameday -- One Sedin vs. One Niedermayer

Share All sharing options for: Ducks Gameday -- One Sedin vs. One Niedermayer

Vancouver Canucks (7-6-0, 14 pts) at Anaheim Ducks (3-6-1, 7 pts), 7 pm
I do believe this is the first NHL game since the lockout (and possibly the first ever) featuring one Niedermayer and one Sedin -- verify that with Anaheim Calling and Nucks Misconduct.

The Anaheim Ducks are 1-5-0 at home, getting outscored at the Honda Center by better than a 2-to-1 ratio.  They've played 18 periods at home -- outscored their opponents in only 3 of them, and have been outscored in 11.  So I guess it's time for a cartoon, eh? 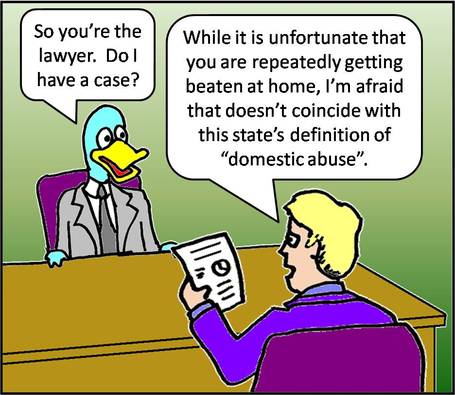 Obviously you can tell from the blog archives, nobody's ever given BoC any legal advice.

Tonight, the Ducks take on an injury-depleted Canucks squad playing without Luongo in their second game in less than 24 hours.  I vaguely remember a time when this sort of game was an opportunity for an easy win; now who knows?  If the Ducks have any hope, I suppose it's games in hand -- they've played the fewest games of any western conference team, but they had better start making them count soon.  And I suppose we can look forward to the eventual debut of Kyle Calder.  Yay?

Prediction: Could be an exciting game if the Ducks and Canucks stick to the the way they started last season, 364 days ago in a spooky Halloween game. That game featured five goals scored over a 2:39 span, a 6-6 regulation in which neither Sedin was on the ice for a single GF or GA, and a spooky thirteen-round shootout won by Mattias Ohlund.  Let's say Ducks 3, Canucks 2.  Goals by Koivu, Whitney, and Perry.

I won't be around for tonight's comments, though -- it's my buddy's birthday, so instead we'll be chowing down some Korean food, then nerding out to a late-night viewing of Battlestar Galactica -- The Plan.  Fanfrakkingtastic.