Ducks Gameday -- The Boston-Anaheim game that nobody's talking about.

Share All sharing options for: Ducks Gameday -- The Boston-Anaheim game that nobody's talking about.

Anaheim Ducks (0-1-1) at Boston Bruins (1-1-0)
Few things in life are as tasty as a Stanley Cup of Chowder.
To read about some other Anaheim-Boston game, visit Halos Heaven and Over the Monster.

Actually, I don't feel like talking about the Ducks much either.  So let's talk baseball.

I can't tell you a whole lot about the specifics of Angels' postseason domination by the Boston Red Sox -- before this summer, I haven't followed baseball closely since 2002 -- but my roommate has been stressing about this first-round match-up for weeks now.  (Actually that has kind of pushed me away from watching baseball -- I can handle only so many "PLEEEEEASE, Morales" whines, especially after the Angels clinched.  Plus once pucks drop on my TV, I'm hopeless.)  I do know that the BoSox have beaten the Angels in all four postseason meetings, including three of the past five postseasons, where Boston beat Anaheim nine times and lost only once.  It's sort of like the Ducks and the Minnesota Wild, I suppose -- they met twice since 2003 with the Ducks taking eight of nine contests.  Or maybe it's like the Mighty Ducks and Red Wings from the late 90s -- the Wings took all eight of those meetings, ending both of Anaheim's first two franchise postseasons, and we know how sweet it was once the Ducks finally slaughtered that postseason demon.

As I see it (having watched the Angels roughly from early July until a week ago), the Angels have all the elements to succeed -- the offense kicked ass during the hot summer, and after that the starting pitching really became a strength.  And their defense, particularly on the infield, has been stellar year-round.  They've got power, they've got speed, they've got patience (Bobby Abreu is a pitch-fouling genius), they've got hunger -- just needs to come together in the critical moments against their nemesis.  They need an Adam Oates, a Stumpy Thomas, and a J.S. Giguere.

As a guy who hasn't followed the Angels well, I'm actually a little shocked to see their mediocre playoff results -- the Ducks are a team that has generally gotten better than they've deserved from the postseason, but apparently that karma hasn't crossed Katella very often.  But then again, I am shocked that baseball -- the sport with the longest season by a country mile -- decides their first rounds with a best-of-five.  Assumedly there's a point to having such a long season, statistical certainty or whatever -- and it did come down to the wire for the Twins for sure -- but I really don't know why that wouldn't apply to the opening round of playoffs, which is already down to eight teams.  But shrug -- it's baseball -- I can't really complain.

Incidentally, my favorite Angels are the unsung guys, generally -- I'm a big supporter of Mighty Maicer, Action Aybar, and for no good reason this summer I cheered loudest for Gary Matthews Jr.

So the Angels have their Boston curse; what about the Ducks?

Well, the Ducks don't have a curse with the Bruins per se, their curse is more about forgetting how to play hockey now that Chris Pronger is gone.  Twice in six periods this season the Ducks have mustered only two shots-on-goal in a period -- a stat that's type to tough without putting your head in the oven.  TWO SHOTS!  I don't even know how such a thing is possible, let alone repeatable.

So yeah, the Ducks are re-discovering the importance of elementary hockey cliches like "let's not be idiots this period", but we shouldn't forget -- even when the Ducks had Pronger last season, they still lost a 6-0 game in Boston last season at a juncture where they needed standings points.

I'm still waiting for the first game from the Ducks this season where I don't walk away embarrassed.  Positivity. 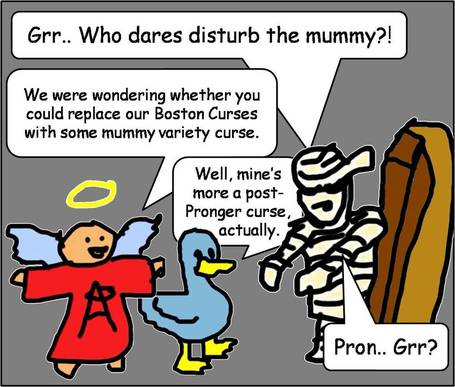 Not the funniest, but it was innovative: all three characters in this comic were fingerpainted on my iPhone.