Let's Do Some Lines

Share All sharing options for: Let's Do Some Lines

In the first period, the first line of Smyth-Kopitar-Williams dominated play, scoring three goals in only 6 minutes of ice time.  Smyth had the first goal, a nice deflection of a Jack Johnson shot.  Then Justin Williams scored, again on a nice deflection, this time of a shot by Drew Doughty.  Then Anze Kopitar got in on the act, burying a cross-ice pass by Ryan Smyth and finishing a beautiful breakout started by Kopitar himself.

In the second period, the second line of Frolov-Handzus-Simmonds tagged the Wild for another goal.  This one was started off a turnover caused by Alexander Frolov, which was collected by Meat Train Simmonds.  Meat gave the puck back to Fro, who waited and waited until Michal Handzus found a hole in the defensive coverage.  Handzus received the pass, fought off a defender and put the puck through the 5-hole and into the net.  The line was on the ice for about 15 1/2 minutes of even-strength time and once again paired up against the other team's top line and once again did not allow an even-strength goal.

In the third period, the third line of Purcell-Stoll-Brown iced the game with a pretty goal on a 2-on-1.  The odd-man rush was caused by Dustin Brown, who managed to get the puck through a Wild defender after a bad pass and relayed it to a streaking Jarret Stoll.  Stoll slipped a pass through a Wild defenseman to a wide open Ted "Bailey" Purcell*, who slammed the puck home.  Brown had a great game last night, while Purcell had an outstanding defensive effort.

*My brother sent me a text last night that said, "When Purcell scores he should ride around on an ATV."  I think that's a good idea.

The Kings won last night because they had better forwards than the Minnesota Wild.  The Wild tried to avoid the fate of the San Jose Sharks by splitting up their top line to get away from Fro-Hand-Meat, but the result was that they didn't have one line strong enough to stop Smyth-Kopitar-Williams from running roughshod over their defense.  Then, while the Wild were focusing on matching up with those two lines, the Purcell-Stoll-Brown line snuck in a goal to put the game away.  Terry Murray has been doing an excellent job of balancing his lines and has used his 4th line sparingly since the top 3 lines are soo effective.  The only 4th liner who saw any extended time was Brad Richardson in the 3rd period, who had a very good night.  It'll be interesting to see how the Kings fare on the road, when the opposing team gets last change, but right now I'm not too worried about any of our top 3 lines.  Holy hell, when was the last time I said that?

The defense was better with the return of Sean O'Donnell.  Both power play goals you can pin on Davis Drewiske, and I can't say I understand why he was out there in the first place.  Granted, Sean O'Donnell and Jack Johnson were in the box for both goals, but it seemed like Murray would have put Drewiske out with Rob Scuderi no matter what.  I know Drew Doughty and Jack Johnson both play the power play, but there's no reason Drewiske should be out on the penalty kill over either one.  I think that might change by Saturday.

Jonathan Quick had another game where he let in some goals but overall didn't look bad.  He had a one-timer and two deflections right to the stick of a Wild player and he didn't have much of a shot on any of them.  His rebounds were a little out there, but he doesn't usually have that problem.  Hopefully he can get a save percentage over 90% in a game sometime soon.

Good day all around: Dodgers win because Matt Holliday tried to catch a baseball with his vagina, Kings win, Jim & Pam get married... man, who needs a life when you can watch TV?

My absolute favorite moment of yesterday happened during the Dodgers game.  Loretta's up with the game on the line, tension everywhere... and I couldn't stop laughing when I saw this: 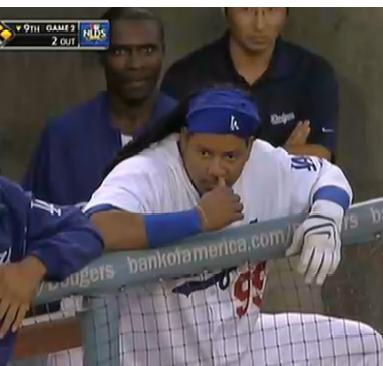 What the hell is (I think it's) Orlando Hudson doing?  It's like he's moving the ball onto Loretta's bat with his mind.  Maybe he noticed Manny was picking his nose and is trying to let us know.  It's not like he looked like that for a split second, either; he held that face for like 4 whole seconds.  I don't know, I thought it was hilarious.