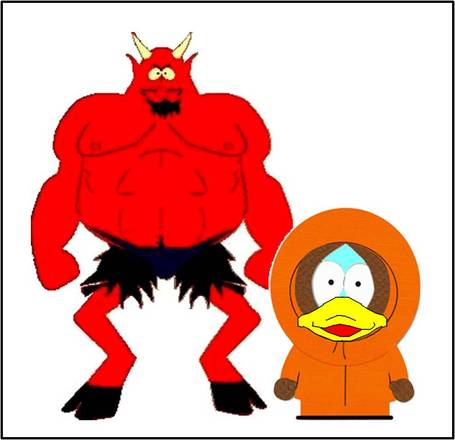 Well, there are signs of life for these Anaheim Ducks, though it's unclear yet how stable it promises to be.  The Ducks have won 3 of their last 5 games, though all three victories were at home against injury-depleted opponents, and now get to test that recent optimism against a pretty daunting road trip -- here's how their next four opponents fared at home last season.

Last season, only ten teams lost 16 games or fewer at home -- the Ducks will visit four of those teams over the next six-day span.  Using last year as a basis, an average traveling team would get 3.44 out of a possible 8 standings points on this road trip; do the Ducks have the mettle to do any better?

I've segmented the Ducks' 15-game season into three 5-game sets below, just to show what could be a turnaround.  It's definitely a bit deceptive, though -- in Game Ten, for example, the Ducks gave up 5 PPGs to the Maple Leafs; had that game been shifted to the last grouping some of this post's positivity disappears quickly.  Plus five games is always a shaky sample size.  Nevertheless:

There are some genuine signs of improvement -- shot discrepancy is narrowing noticeably, penalty killing has seemed effective of late, and definitely goals-for have been going in.  The first five games the Ducks hung even, despite being outshot wildly.  The second five games the Ducks imploded -- the shooting actually improved, but goaltending/defensive results were horrible.  The last five games have served as some pattern for success for the Ducks -- after the jump, a look at how some of the individual players' stats changed over each segment.

The analysis here isn't going to be too heavy -- I'm really just looking at points and plus-minus for sets of players for each of the five-game segments.  I did also look at shots-on-goal, but didn't end up including it; mostly Anaheim's improvement in shot discrepancy came on the defensive end, it seems. 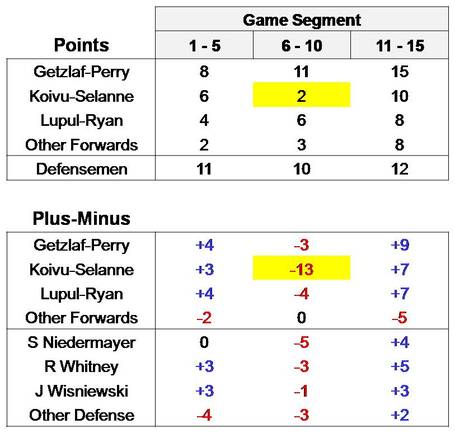 Also, I've grouped players vaguely according to role -- Getzlaf and Perry always play as a top-line pairing, as do Koivu and Selanne on line two.  Lupul and Ryan I've thrown together as the two tagalongs -- they've traded spots a ton among the top two lines.  And all other forwards and d-men just get a lump-sum total.

Points-wise, it's easy to see why games 11-15 were the Ducks' most successful -- every grouping enjoyed their best production.  But it's the painful games 6-10 that interest me; what ailed the Ducks when they couldn't win?  And by eye, the biggest fallback goes to the Line 2 Finns -- their failure to deliver hardly anything in those five games stands out as a big factor in the slump.

The plus-minus portion helps spread that blame a bit -- nobody was really outscoring those five games, but again, the big number points at Teemu and Koivu for that stretch -- their line was giving up goals way too easily.

I'm not going to point fingers at those two, though -- five games is nothing to fume over, and with their performance in the next five games, it's already water under the bridge.  But it does stress a bit the need for Anaheim's second line to keep productive -- when they are effective (along with other lines doing as they should), it seems that's a key to Anaheim's success.

Which isn't a new realization by any means -- since the Cup season, the Ducks have been on a hunt for effective second-line scoring.  First Andy McDonald struggled to carry the line (without Selanne the semi-retirer), then Doug Weight, then Brendan Morrison, then Andrew Ebbett, and now the task falls on Saku Koivu.  In the last five games we've certainly seen Koivu (and Selanne -- he has onus here too) carry his end of the deal, while the top line and depth lines have also delivered -- in a sense, the Ducks have played their formula for success.

At least the last five games, the Getzlaf line has been productive (though he still could be better), the Koivu line has followed up nicely, and the depth forwards have limited their bleeding -- if the Ducks can keep that up for their next five games (consistency?  shudder), there may be hope on this road trip.  Besides, the Devils, Blue Jackets, Red Wings, and Penguins are all injury-plagued to various degrees; here's hoping the Ducks can keep taking advantage of that.

I don't know one way or another whether there is some plan to trade J.S. Giguere to Toronto for Vesa Toskala -- I'm never very good at believing in rumors (I'd use "rumours" except this seems to be an OC Register scoop), but an expiring goaltending contract for a bad goalie looks better than a non-expiring non-movable contract for a questionable goalie in my books.  Either guy can be Hiller's backup, I suppose, and maybe Toskala's play improves when he hears all the Finnish chatter in the locker room.

The real question, though, is "what else needs to be involved in a trade", and to tell the truth, I'm not quite sure which team needs to chip in more assets to make the fictitious trade work out.  As usual, we'll probably need to see an actual trade happen before I can offer too much useful commentary, but if you're bored and want to talk it up, comments are open.  Theorize away!

Prediction: The game gets delayed 2 1/2 months midway through the second period when a careless sideline reporter asks Scott Niedermayer whether he'd rather retire or be a backup goaltender.  "Hmmmmmm...."