Ducks Gameday -- The Most Frustrating Concurrent Eleven-Game Scoring Streaks Ever

Share All sharing options for: Ducks Gameday -- The Most Frustrating Concurrent Eleven-Game Scoring Streaks Ever

Well, this season's pretty much over.  Or at least it's become hugely reliant on a scripted Disney finish.

Even if the Ducks finish the rest of their season seven games above .500 from here on out (32-25-7, let's say), there's less than a 1% chance that they'll qualify for the postseason -- based on Sports Club Stats' 457,757 simulations with that finishing record, Anaheim would still miss the postseason with a 99.2% likelihood.  For comparison, if the Sharks finish their season going seven games above .500 they'll make the playoffs with nearly a 100% likelihood; if the Kings do so they'll make the playoffs with a 91.2% likelihood.  And I don't really know how this Anaheim team would even generate that sort of turnaround -- there's not much to suggest this team is on the cusp of anything except another soul-shattering loss.

What's been frustrating about the losing is that Ryan Getzlaf and Corey Perry have been seemingly scoring at an exceptional rate -- both are riding 11-game scoring streaks (Getzlaf 2-17-19, Perry 9-7-16) that have them now among the NHL's top sixteen scorers (heck, Getzlaf leads the league in assists), but their offense hasn't led to many victories at all.  Over their concurrent streaks, the Ducks have a 3-6-2 record, have dropped to 15th in the west, and part of the problem seems to be about when top-line offense decides to kick in.  "Too Little, Too Late" seems an appropriate phrase: 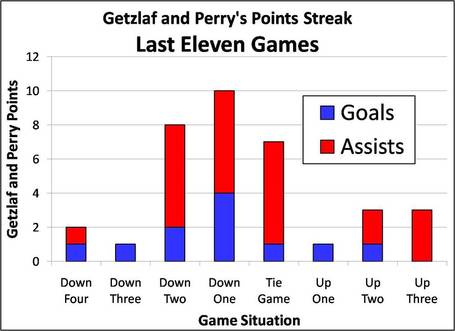 Getzlaf and Perry have combined for 11 goals in the last 11 games, but 8 came when the Ducks were trailing.

Over the last 11 games, 60% of Getzlaf-Perry points and 72% of Getzlaf-Perry goals have come when the Ducks were already behind on the scoreboard.  Of course, with the losing, the Ducks have been trailing more than they've been leading, but it's not nearly that stark a contrast -- over the past 11 games, the Ducks have spent 38% of the time trailing, 34% of the time tied, and 28% of the time leading.  They've only been outscored 35-34 over that stretch, so underlying numbers aren't horrid, but the timing of offense sure sucks.  Just enough to lose games.

For Getzlaf and Perry in particular, it seems that they don't really get into gear until after they've already cost the Ducks on the scoreboard; then usually comes a renewed effort to make up for earlier on-ice shittiness (to be fair, there's plenty of candidates for "who plays shitty when the score is tied", not just Getzlaf and Perry).  The general rule seems to be that the Ducks' top line is very good in trailing situations, but Getzlaf and Perry aren't difference makers in situations when opponents have incentive to score goals.

I'm not against desperation offense, by any means -- it's "nice" that the Ducks do compete after falling behind.  But that skill on its own has very little value; this season's a pretty good testament to that.

I'll be missing tonight's end-of-game comments -- I'm joining in on a Blackhawks podcast / radio show at 7 pm tonight with the guys from HOCKEE NIGHT to help them properly complain about Andrew Ebbett.  If you're web-savvy enough, you may be able to listen in and submit chat comments live, but I'm not the go-to source on how that's done.  [UPDATE, 6 pm -- just got an e-mail that tonight's puckcast has been called off for tonight.]

Prediction: Ducks fall behind, then Getzlaf and Perry extend their futile points streaks.