Well, that road trip sure sucked. 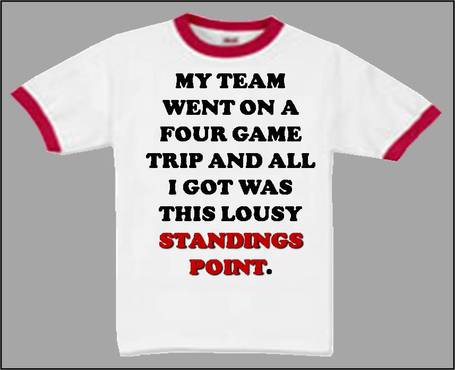 Just for historical perspective I decided to look at the last four post-lockout seasons (since the introduction of the shootout and forced victories) and checked how many teams had 15 or fewer standings points through their first 19 games.  Here they are:

This year, of course, we'd add the Hurricanes, Maple Leafs, Wild, and Ducks.  Only two of the thirteen teams listed ended up qualifying for the postseason: the 2007 Ottawa Senators (who finished 41-14-8 over their last 63) and the 2008 Washington Capitals (who finished 37-19-7 over their last 63).  Only two of the other teams ended up winning half of their remaining games (2008 Oilers and 2009 Panthers); the rest pretty much remained basement teams.

So I suppose there's still vague hope for a Ducks turnaround, but I don't think that even the 2008 Capitals can be used as a tangible inspiration for Anaheim -- they essentially qualified for the postseason by winning the worst division in hockey.  So I guess the question is: how the heck did the 2006-07 Ottawa Senators turn from one of the worst-starting clubs of the season into a Cup Finals juggernaut?  I should note, the Sens' 41-14-8 finish was not only the best out of 30 teams that 06-07 season, but is better than any 63-game finish we've seen since.

At first glance, I really don't spot any huge answers why the Sens turned it around (or even why they started so badly) -- they were going through their own post-Chara curse, of course, and did start the year platooning between Emery and Gerber, but never fired their coach nor made any impact trades until January.  From the looks of things, they simply started playing better -- waaaaaay better.  I wish I had a Sens source to talk about this, but I'm pretty sure that it's still too soon for a Ducks fan to ask a Sens fan about that. 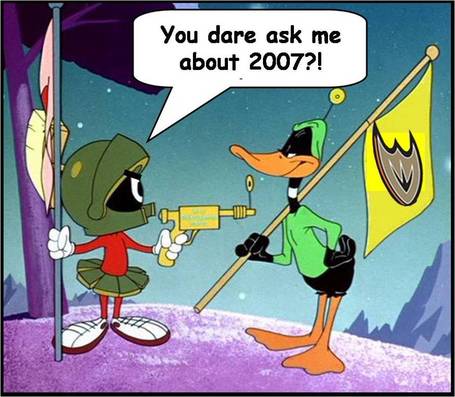 If you have any recollections about what happened in Ottawa circa November 2006, feel free to leave them in the comments.  And hey, if you're a visiting Bolts fan, feel free to share in the comments as well: your team won a Cup this decade and ended up in the basement a few years later -- any coping tips for Ducks fans?

Prediction: The 2006-07 Senators won their twentieth game 4-1, on what would be the start of an 8-wins-in-9-games stretch.  With these Ducks, though, who knows?  The last time the Ducks beat the Lightning Marc Denis was in net.  BTW, I'll be missing tonight's game comments, so maybe they'll win again.  Go MacGregor Sharp.

Side note: the audio of my postponed appearance on HOCKEE NIGHT is now up on their site -- feel free to give it a listen.  I'll warn you, this makes two straight appearances this season where one of the co-hosts has been disconnected partway through.  I guess it fits with the way things have been going lately.

Also, stat-heads should definitely be reading Behind The Net, as Gabe is focusing on bad starts and how they impact playoff likelihood, this time with an eye towards Vegas odds.  Shockingly, if you believe this link, the Ducks are not only currently viewed as a 20-to-1 contender for the Stanley Cup, but have actually improved from the 25-to-1 odds they had before the season started.  Vegas, you crazy bitch.