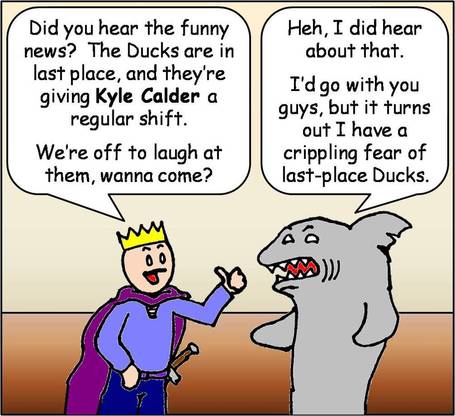 I can make fun of the Sharks from anywhere in the standings, apparently.

Of course, the spirit of this cartoon probably has it backwards -- it's not really that the Sharks played poorly against bottom-ranked Ducks; it's more that the Ducks have played up to top-seeded competition, or at least they once did.  And I don't know if the Sharks will escape my web mockery no matter how successful they play -- not only are they the most recent team that Anaheim has knocked out of the playoffs, it looks as if they'll retain that title for another year at least.

Then again, who knows?  The last time Spade and I went to a Ducks-Sharks regular season game, the Ducks lost a close one, I declared our season dead, and then the Ducks went on to nearly win out the remainder of their regular season schedule.

In that same spirit, I suppose, Spade and I are meeting up pre-game tonight with the notorious Mr. Plank and some of his FTF cohorts at Danny K's pool bar in Anaheim (here's Spade's rendition of our first meeting in April).  Feel free to stop in and say hello -- I'll be the dude in the lucky green shirt: 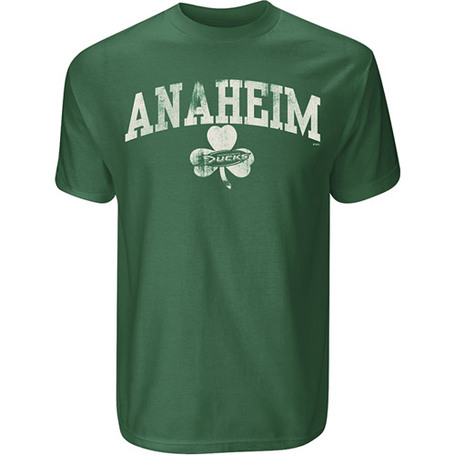 0-2 this season, but whatever. I'm stubborn.

As for the game, I really have no idea where in the upper deck we're sitting, but hopefully we'll have a good view of Mike V's seats.

Prediction: Even though all indications are that he's thousands of miles away, more than one person offers a "Shut the fuck up" towards poor James O'Brien.  Sorry, O'B -- it's tradition now.  Also, Ducks lose a close one; I declare the season dead.