Ducks Gameday -- I've got a bad feeling about this...

Share All sharing options for: Ducks Gameday -- I've got a bad feeling about this...

[Author's note: I'm still mostly on blog vacation this week with family in town, so today's post is pretty hasty.]

Uh-oh, today's game could get ugly real fast.  The Blackhawks have won eight in a row, including the last four on the road where they've outscored opponents 20-5.

Regardless, I'm off to see today's game up close and in person, and co-blogger Rudy Kelly is coming with me (mostly to laugh at the downfall of the Ducks) -- a post-Thanksgiving Row B event!  My kid brother is in town from Chicago for the holiday, so he and another pal will complete the foursome.  Look for us on TV or at the arena -- I'll likely be the one cursing and Rudy will likely be the one jeering. 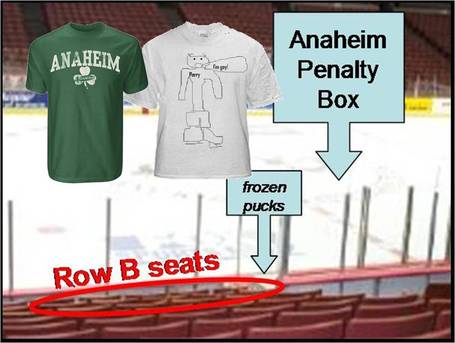 But hey, we may get to see a decade-old Ducks franchise record tied today.  From last game (which I still haven't watched):

Corey Perry assisted on Niedermayer’s goal to extend his points streak to 16 games, one game shy of the franchise record set by Selanne in 1999. Perry’s is the longest streak in the NHL this season.