Share All sharing options for: Ducks Gameday -- A Christmas Cartoon

Well, on the one hand, despite some recent winning, the Ducks are still tied for last place in the western conference.  On the other hand, they do sit only six standings points out of the eighth seed with a chance to close the gap tonight -- seems kind of hopeful.  But yeah, screw it -- the Ducks have played better since I declared the season dead; I shouldn't try to mess that up with any optimism today.

We did have a great time at Friday's day game, though.  It's the second straight year I've attended the Black(hawks) Friday game with my kid brother, and the second straight year the Ducks have won via shutout.  I'll have to make that my top priority game next year, I think.  Corey Perry did tie Selanne's franchise record 17-game scoring streak (on a Teemu goal, no less), and of course he has a chance to take the record outright -- and yup, the game isn't televised at all tonight.  Good luck, Radio Perry (or if anyone has a link to make him into Internet-Video-Stream Perry, feel free to leave it in the comments).

In the meantime, I've been alerted that the NHL Arena boards are holding some sort of Ducks Blog-Off (Round 1), which pits Duck fansites against each other in a poll.  I don't know, though -- Rudy's not on the Kings list; Chen's not on the Sharks list.  So I'll say "whatever" -- go vote for Anaheim Calling.  I will, however, be using these poll lists to update our dated Pacific Division blogroll.  One of these days, I'm sure.

Also, my first submission for Chamber of Comics' cartoon marathon is posted -- it's pretty random and generally reflects my hunger at the time I was sketching.  I was inspired by Mike W's (and pals') attempts at a 30-cartoons-in-30-days challenge -- I'm not truly participating, but I did mess around with a few things style-wise: drawing with ball-point pen instead of a Sharpie and working a bit more with multi-panel formats.  I must say, multi-panel in particular has been a bit of a struggle -- I'm still not sure whether it's best to start writing from the first panel or from the last.  Also, I have a tendency to put too much storyline in, as I did with my second submission (after the jump).  It's a cute idea and even has a holiday theme, but my first draft had twice as many panels and 300% more explanation -- now I've slimmed it down to its basic essentials. 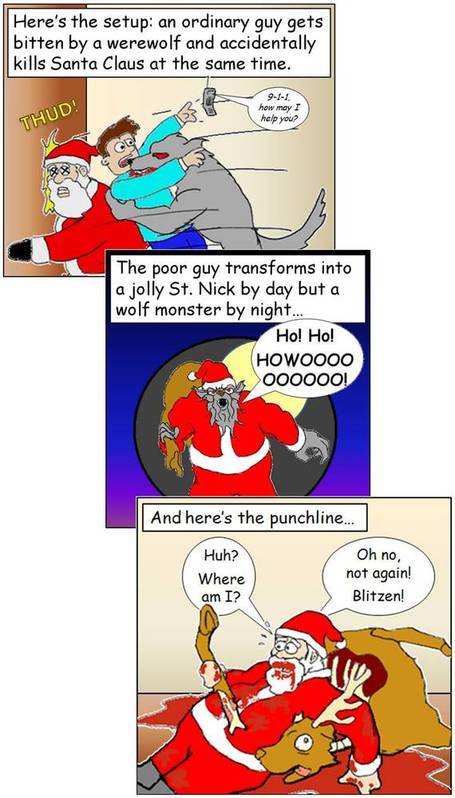 Prediction: Shockingly, Kyle Calder's presence is missed.  In all seriousness, he had a damn good game on Friday -- we were only partially joking about how hard Rudy would fight for Kyle's signed stick if he was third star of the game.