Ducks Gameday -- Under the weather

Share All sharing options for: Ducks Gameday -- Under the weather 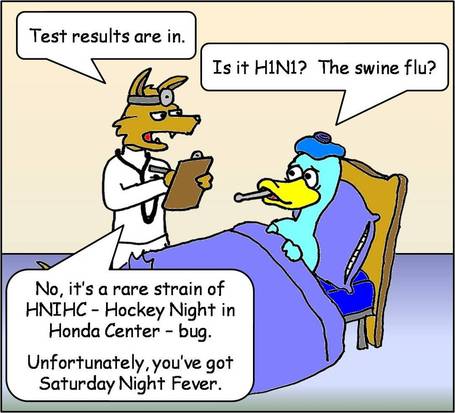 Cartoon inspired by my own flu-like symptoms.

I had written before about the rarity of Anaheim and Saturday home games -- of the 192 games at the Honda Center over the last four seasons (including playoffs), only 6 had ever occurred on a Saturday night.  That's changing fast, though -- the Ducks will add 6 Saturday home games this season before Christmas, tonight being the fourth.

And so far, Saturdays at Honda Center have solidly sucked -- Ducks have lost all three games to western opponents and have been outscored 15-5.  Plus it's already a jam-packed schedule: why is it necessary for the NHL to cram in 13 games today (more than anybody can possibly follow) followed by just 2 tomorrow?  So yeah, put me in the "give me back Sundays" crowd, though a Saturday night Ducks victory might help change my mind.

Maybe there is a tide turning a bit; the Ducks have gone 2-1-1 over their last four games, and even though their wins both came against severely crippled lineups (Vancouver and Nashville), there has been a stronger sense of competency to Ducks hockey.  Plus the top lines are outscoring -- over the last four games, the top-six forwards have combined 13 goals and are each +3 or better.  Short-term illusion?  We shall find out.

I suppose I can take this as a sign of positivity, though -- dentistry helped the Ducks last year, at least: