Ducks visit the Canucks tonight and the Sharks tomorrow -- a two-game stint straight from Life Aquatic! 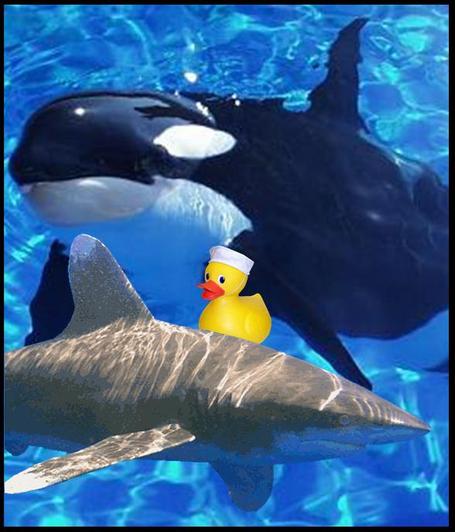 Man, this image is more than three years old.

And while the Kings and Sharks guys are talking depressedly about shit sandwiches and derailed seasons and general suckitude while they sit near the top of the league standings, I'm still rolling in positivity while occupying the western conference's basement -- despite the 15th spot, I really think the Ducks are an improved team from when they started this season.

Still, the recent ability to stave off regulation losses is key, and the Ducks have plenty of season left to continue their ascent from last place.  They may not be able to force overtime tonight -- Vancouver's a strangely decisive team that has played 33 games and seen overtime only twice.  We'll see, though; the Ducks had played four straight overtime games before their regulation win in Columbus.

The Ducks are still without Joffrey Lupul and Teemu Selanne for the foreseeable future, which is significant in that they are two of Anaheim's top four goal scorers, along of course with Corey Perry and Bobby Ryan.  More than 60% of the Ducks' offense has come off of those four shooters' sticks -- they've combined for 54 goals, the rest of the roster has a combined 35.

Of course, the Registered Sex Offender's 4-goals-in-first-5-NHL-games has certainly helped offset some of that missing offense -- for the first time this year, the Ducks have a seriously-producing second line.  But in two games since Lupul's latest setback, Kyle Calder hasn't been terribly useful in complementing any Getzlaf-Perry offense on the top line.  Generally, they'll will get pucks deep but once there, Calder's the weak link in the forecheck -- seems that defenders are recovering pucks pretty easily from him.  If I'm Carlyle (and thank the heavens I'm not), I'd probably give Calder another shot on the top line for one more game, and make sure it's not just rust we've been seeing, but if that starts out flat I'd probably switch out with Nokelainen and see what happens.

Or heck, if I'm feeling extra gambly, I'd even start a new chapter of the ever-thrilling Evgeny Artyukhin "will he help us or hurt us?" saga.

We're getting there, though -- the offseason dream of a multi-line offense is nearly there.  Positivity!

Prediction: I didn't tell the whole story about the eleven-game stretch last season -- by the time it ended, it was actually a fifteen-game stretch with only two regulation losses.  So, in keeping with historical tradition, the Ducks become the third team this season to push Vancouver to OT, and then the first team this season to beat the Nucks in an extra frame.  Ducks 4, Nucks 3 (OT).  Goals by Ryan x2, Getzlaf, and Boynton.

I'll be around for game comments tonight -- feel free to stop by and chime in!