The Kings are putting Kyle Calder on the top line in place of Matt Moulson Friday night.

You know that scene in The Happening where the blonde chick just stares forward while she slowly inserts a knitting needle into her neck?  I'm pretty sure the Kings are doing that right now.

So now that Calder has become a top-line staple for the Ducks, I suppose Anaheim has become that fellow later on in the movie who lays down in front of a lawn mower.  For the last five games, Calder has been inserted with Ryan Getzlaf and Corey Perry on the top line, and while it has enabled Bobby Ryan to help kickstart the Sex Offender's career on the second line, Getzlaf and Perry's even-strength results have been pretty terrible in the meantime. 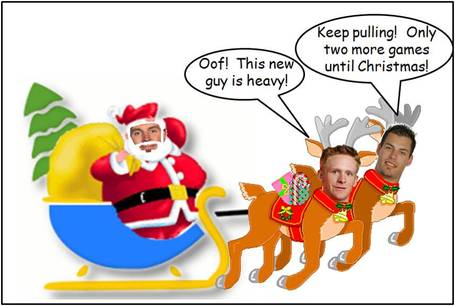 Nothing like a holiday cartoon to drive the point home.

I don't think the Ducks can afford to wait until Joffrey Lupul or Teemu Selanne's return from injury to get even-strength production from their top two forwards -- either Calder's going to need to step up and be useful or Coach Carlyle will have to find another fill-in.  I'm still partial to trying out either Nokelainen or Beleskey personally -- both seem fundamentally sound -- and Arthur and Daniel discuss more top-line possibilities at Anaheim Calling, topic of the day, I guess.

I should stress -- it's not that Calder is useless; the game that Rudy and I went to against Chicago he could have been a legitimate third star of the game playing on a line with Todd Marchant.  But that seems the key -- Calder needs to be on a line where puck possession isn't terribly important, and Getzlaf and Perry need a linemate that can better handle the fundamentals of controlled cycling.

But I can't fully complain; the Ducks still only have one regulation loss in their last eight, and team success (especially this season) allows all players a bit more leeway -- at the very least, they still are drawing top defenders away from Koivu and Ryan.  That's still a contribution, and I thought they generated better chances towards the end of the last Phoenix game.

The Ducks have beaten the Avalanche in 8 of their last 9 meetings, outscoring them 30-15, with the only flaw being a 1-0 Jose Theodore shutout.  Let's hope the one-sidedness continues.