Well, once again I'm quite rushed by holiday family shit, but I think I can convey most of today's topic through cartoon, as usual: 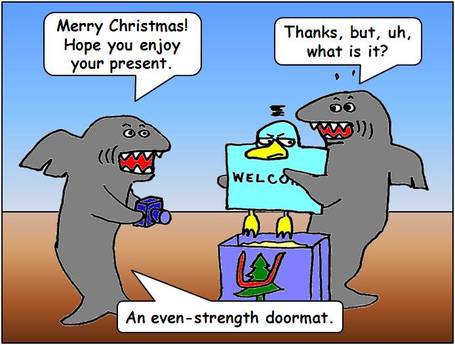 The Ducks and Sharks have met up three times so far this season, once in each month, and the Ducks have been routinely crushed -- they've been outscored 11-4 overall, but Anaheim's four goals consist of three 5-on-4 tallies and one 5-on-3 goal; Sharks have outscored the Ducks 7-0 at even-strength in the three games (e.s. shots are SJS 81, ANA 58).  Even-strength doormats, indeed.

Jumbo Joe Thornton in particular has been murdering Ducks since they eliminated him last spring -- four goals and four assists in three games.  Meanwhile Ryan Getzlaf and Scott Niedermayer are each -5 against the Sharks this season, and Corey Perry is a -6.  And I'm not sure if we can expect much better if Coach Carlyle keeps going back to Kyle Calder on the top line, either -- Calder played more than half of Getzlaf & Perry's even-strength ice-time the last game against Phoenix and that ended quite futilely.

Prediction: I may be late to tonight's game comments, but I'll show up eventually.  Ducks win a Christmas miracle game, 4-2, and shock the Sharks by scoring an even-strength empty-netter.  No goals by Kyle Calder.