Share All sharing options for: Ducks Gameday -- First glance to the future.

Man, it's tough to get excited about tonight's game; here's some reasons why:

2: The number of road wins the Ducks have this season, the last one coming nearly two months ago, when the Ducks pulled a Finnish Flash miracle in the second half of the third period + shootout.

1: The number of wins the Ducks have against Pacific Division teams this season, the only one coming nearly a month ago, where the Ducks nearly blew a 4-goal third-period lead but held on.

0: The number of road victories the Ducks have this season against western conference opponents -- you know, the ones that sit in front of Anaheim on the ol' standings board.  In fact, the last time the Ducks beat a western conference team in their own building was exactly seven months ago, and afterwards I drew this.

Plus, I'm not even going to be around to watch & comment -- you're on your own tonight.  Play nice!

The Ducks needed a solid homestand over the past two weeks and showed improvement to some degree -- 4-2-1 certainly looks better than their prior record -- but really, they played seven critical games at home and won two in regulation and lost two in regulation. 5 western opponents came in to Honda Center, and 4 of them left with at least a standings point -- that's not good enough for a team trying to dig out of the basement.

So I suppose it's worth taking a glance towards next year -- courtesy of CapGeek, here's the one-way salary commitments the Ducks are currently carrying into next season.  I've left out two-way contracts like Mikkelson (who's an RFA), and Sbisa, Festerling, Beleskey, and Sharp (all signed cheap), though looking at it now it probably makes sense to throw in Sbisa and Mikkelson at least.  Anyways: 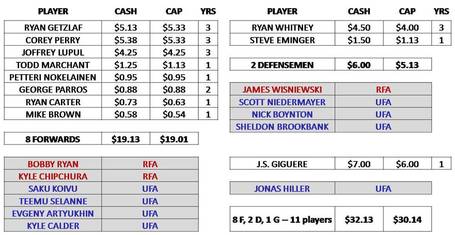 There's plenty of holes to fill, notably on the blueline (Whitney and Eminger?  God help us all) and in the top-six forwards, but there's money to spend, also.  Definitely a healthy portion of that money figures to go to Bobby Ryan, deservedly so, but I'm not too worried about his ability to earn it.

I'm not going to delve much into it today, but here's my overall thought, having laid it out: I'm not sure that a lot needs to be done immediately to this core for next season.  Sure, when the Ducks are officially out of the running I'm all for UFA firesales and future-reward trades, but there's no issues I see here that couldn't be dealt with late this season or this coming summer, especially if other teams are feeling cap-ceiling-pressured.  I dunno -- it seems there's usually a ton of urgency for last place teams to "Sell Sell Sell", but in Anaheim's case, I'm not sure haste will accomplish much.  It may not make sense to do much of anything until later in the season when there's more buyers in the market.

Feel free to discuss future-planning in the comments; I'll have some bulleted thoughts tomorrow.

Prediction: Remember when I used to talk about opponents in these gameday posts?  That was back when it mattered who the Ducks played.  These days, Anaheim can lose to anybody.  But hey, tonight we get to see Corey Perry (he of the longest scoring streak since Crosby) try to perform his next "Douche Trick" -- a term coined by Morbo and illustrated below by our pal Spade.

Look out for Getzlaf piss, Turco!  It'll turn you bald, too.