Well, seeing as it's the last day of the decade, I do have an old gripe to bring up, one that I assure you is quite unabashedly lame.  You see, tonight around midnight a lot of people will be wishing off a year they call "Two Thousand Nine", and while the usage is quite common, it's still a term that drives me batty.

I guess I'm just a stickler to a convention that existed back when I grew up, in a decade we used to call "The Nineteen Eighties".  Back then, we weren't silly; we never referred to it as "The One Thousand Nine Hundred Eighties", because the words we'd use to describe years had its own separate convention from the words we'd use to describe four-digit numbers.  It was an incredibly convenient system for most everyone, and I thought for sure the tradition would last throughout my lifetime.  And for the most part, that convention did hold strong, up until the waning moments of December 31, Nineteen Ninety-Nine.

Then all of a sudden it all went to shit -- the lazy man's "Two Thousand" became the dominant term.  Never mind that everyone still said "Nineteen Hundred" for 100 years past and "Twenty-one Hundred" for 100 years in the future -- for a ten-year stretch, seemingly everyone dropped the convention that had served us so well in the past (and should serve very well in the future) and reverted back to number-talking.  Fickle us.

But now I sense a revival -- with a new decade comes hope, and a good many people are already using the term "Twenty Ten" and returning to the year-speak tradition I grew up with.  So tonight, if you feel like it, humor me -- instead of bidding farewell to "Two Thousand Nine", bid farewell to "Twenty-Oh-Nine" (or "Twenty-Aught-Nine", if so inclined).  Or just make fun of me in the comments; your call. 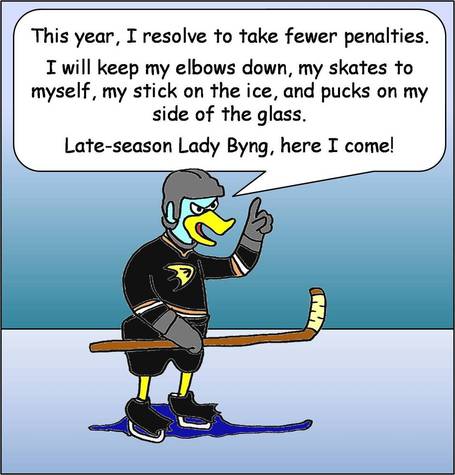 For Ducks fans, the past decade will be remembered mostly for its postseason glory -- the Sometimes-Mighty Ducks made the playoffs five times since 2000, and enjoyed a great deal of success once there.  Over the past ten years, Anaheim has an impressive 49-28 postseason record (including an unreal 14-3 record in overtime games), plus has a nice symmetry to their five playoff appearances:  one first-round exit, one second-round exit, one conference-finals-exit, one cup-finals-exit, and of course California's first Stanley Cup.  That's paying your playoff dues.

Yeah, I do care about the Olympics, but not in fucking December.  Still, On the Forecheck has put together a nice listing of Olympians by NHL team; Ducks fans will get to see Selanne & Koivu on Finland, Niedermayer, Getzlaf, & Perry on Canada, Hiller & Sbisa on Switzerland, and probably Ryan & Whitney on USA.  More on that in the new year, though.