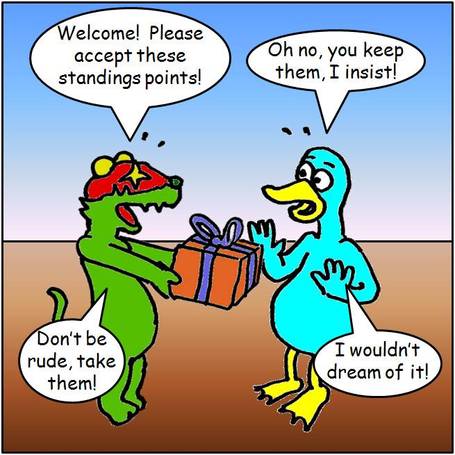 I am somewhat cheered up by this jovial Wild characterization.  Not sure, but the Duck might be British today.

But hey, positivity!  Uhhhh.... at least the Philadelphia Flyers are slumping.  After a stretch where the Flyers won 7 of 8 games, they've since lost 6 of 7 in regulation and are currently outside of a playoff slot.  They'll probably turn it around, of course, but if they don't, it may be that the Ducks end up with two excellent first-round draft picks for next summer's entry draft in L.A.  C'mon, Pronger -- make it so.

Prediction: I'll be absent from game comments today also; watching this one late-night on Center Ice DVR delay (Hooray!  No Hayward!).  Still, I think I can guess what's going to happen -- just at the moment when you think the Ducks might win a valiant game in honor of Teemu's broken hand, they'll lose.