Kings Gameday: What is a Slump?

Share All sharing options for: Kings Gameday: What is a Slump?

How is that possible? The only people that you can say are playing out of their minds right now are Meat Train and Scott Parse; everyone else is either doing normal for them or sucking. I guess I shouldn't be complaining since the Kings could be sucking and losing all the time, but it's still kind of baffling. I can't tell what will happen: will the Kings start losing as luck catches up to them, or will their slumping player get better and send the Kings higher up in the standings? Or will their slumping players get better but the results stay the same because luck caught up to them? My head hurts. Everything is chaos, who the hell knows what's going on.

In case you missed it, Heidi Androl was busted for doing 35 mph on the freeway and was subsequently given a DUI. First thought: I really hope Patrick O'Neal was with her so they can both get fired and replaced by Kermit the Frog. (Seriously, that's a great idea and I would contribute money to see it happen.) Second thought: I wonder who was the person that plied Heidi with liquor and then let her drive home... 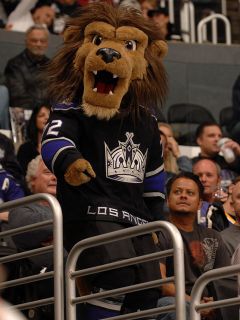 The Kings made a few moves for tonight's game, switching out Peter Harrold (Hooray!) and Davis Drewiske (huh?) for Oscar Moller and Rob Scuderi. In the past few games Terry Murray has been shifting Brad Richardson up to one of the top lines and putting Ted Purcell on the 4th line during the 3rd period, but that doesn't really work when the Kings are tied or down a goal. Bringing up Oscar Moller gives Terry Murray the option of playing either Purcell, Richardson or Moller more during the 3rd period, depending on who is having the best game so far. Good move.

I don't quite understand the benching of Davis Drewiske. Scuderi needs to come back but why at the expense of Davis? He has a few good moves on offense, he plays solid defense and he doesn't take very many penalties. I guess I can see why you can't really bench Randy Jones right now (he has 9 points in 12 games) and I know Terry Murray is desperately in love with the scum bag, but whatever happened to not losing your spot because of injury? Scuderi gets his spot back after being injured, but Drewiske loses his? Doesn't seem fair.

I imagine the Kings will go back to what was working pretty well before Scuderi got hurt: Doughty-Scuderi, O'Donnell-Johnson, Greene-Jones, with Jones taking a few shifts for O'Donnell when he gets tired. Hope it works.

Prediction: Kings win, 4-2. Goals by Kopitar, Williams, Purcell and Brown in a big slump-busting game for the everyone.