Well, with the Ducks still winless in December I figured today was a good opportunity to do something distractionary. Plus it's a big date on the blog calendar -- exactly one year ago today, us misfits at Battle of California packed up our bags and left the old blogspot home to relocate our silliness to SB Nation. 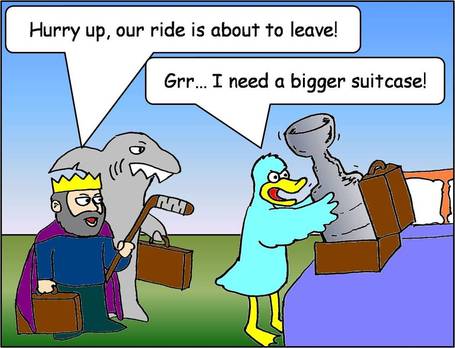 It's been a pretty crazy 2009 for the ol' BoC, and while this isn't really the blog's true birthday (that's in May, mom), it's nice to do something besides bitch and moan about the Ducks' current failings. It certainly helps that the past year was highlighted by the first ever playoff meeting between BoC squads, of course, which was huge -- added plenty of fuel to the divisional fire and gave me a permanent Twitter background, too.

This past year has had plenty of drama from all sides, though -- fake intra-BoC trades (Pronger to the Kings, Marleau to the Kings), actual blockbuster trades (Heatley to the Sharks, Smyth to the Kings, Pronger to the Flyers), emerging young stars (Doughty, B. Ryan), a wealth of superstars (Kopitar, Getzlaf/Perry, Thornton), and even the ill-fated Presidents' Trophy, which is still quite an achievement. It's been a blogger madhouse, that's for sure -- there's been optimism, pessimism, prognostication, superstition, bets made, bets paid, and even squirrels!

Plus it's been a good year for State Rapes, too -- victims include Chicago, Columbus & St. Louis, Edmonton, St. Louis (again) & Boston, plus even the surreal California-on-California -- what a busy year for porno-cartography!

What's in store for Year Two? Already the BoC drama gods are stirring again -- the Sharks have annual questions that can't be answered before April but are killing the regular season, the Kings are learning to deal with the newness of on-ice success and overall relevance, and the Ducks are coming to terms with the comedy of repeated suckitude. Over the next year we've got Olympics coming, a stretch-run and playoffs for two of the teams, and then a Ducks-heavy entry draft conveniently hosted in L.A. Exciting times.

Overall, I have to say that I'm very pleased with the year at SB Nation -- BoC is still a square peg in a network of round holes, but that's fine by me -- I'm glad we've been able to keep up the nonsense and randomness in the new digs, even when aligned with much more "legitimate" blogs. Plenty of thanks to Rudy, Mike, the rest of the occasional writers, the tolerant SBN folk, and of course the awesome commenters and readers -- you guys are aces!

Here's to a great Year Two. Feel free to share your overall thoughts or favorite moments about BoC-at-SB-Nation in the comments. Then pour a drink later and join the game comments when the Stars beat up play the Ducks.

Prediction: Shockingly, all three BoC teams offer plenty of intriguing storylines over the next year as well. Stay tuned!