Share All sharing options for: BoC Gameday—Memo to Carlyle

Yup, Sleek the lucky bastard has snuck his way back to Row B for tonight's game.  My dad had tonight's set with some of his friends, but suddenly can't make it himself, so I'll be chumming around with some of my dad's pals tonight -- probably will put me on some semi-respectable behavior, unfortunately.  Still, you can look for me on TV cursing the almighty name of Handzus (or whatever King is in the near-vicinity), or if you're at the game (Kevin Y), I can probably be found between periods in the main concourse opposite Katella.

It's been 17 games since my last Row B adventure, and in those games there have been 37 instances when the score was tied -- 17 times at the start of the game and 20 times later on.  I've listed and color-coded the results after each tie -- red for when the Ducks surrendered a tie-breaking goal and blue for when the Ducks scored to break a tie.  I've also included who was on the ice when the tie was broken, and what the shots were while the game was tied.  First, here is how the opening goal went for the start of each of these 17 games -- twice the Ducks scored first and fifteen times it was quickly 1-0 bad guys. 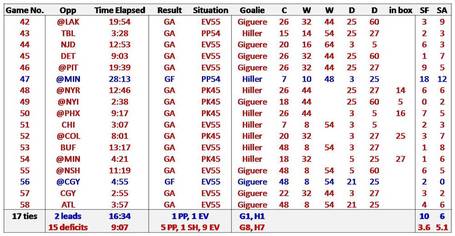 And now, for comparison effect, here are the results of the other 20 tie-game situations, where ties occurred later in the game.  10 times Anaheim took a lead and 10 times their opponents pulled ahead: 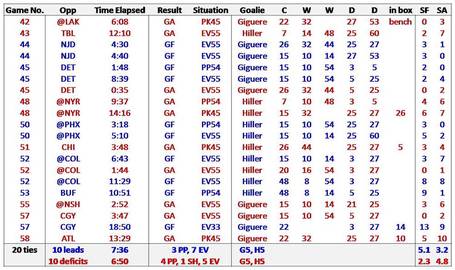 So here's the memo to Carlyle: Whatever you are doing to prepare the players for the opening faceoff, it's not working.  For whatever reason, the Ducks don't seem to know how to handle themselves in scoreless situations.  I don't think I need to emphasize the importance of scoring first in this league -- so whatever you're using to inspire the troops, maybe it's time to try a new technique: "the opposite". 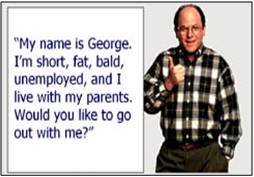 You know, like Costanza taught us -- do the opposite!

So in that spirit, tonight I intend on trying out an opposite approach to my traditional pre-game ritual -- Coke and Jack.  Shocking, right?

I guess I'll end this post with a possibility for positivity (posibivity?) -- according to our favorite kick-in-the-nuts Sports Club Stats site, the Ducks need something like a 16-5-3 record to safely guarantee a playoff spot.  While that seems staggering, it's actually what this Anaheim team has averaged in its last three final-24-game stretches.  Here's the results for games 59 through 82 since the lockout:

Ironically, the best late-season stretch featured a Perry injury and a Pronger suspension.

So, if you're willing to ignore *any and all* depressing statistics from this season and would rather focus on the meta-pattern-recognition trends of say, Coach Carlyle's NHL career, then be optimistic!  His teams have always murdered down the stretch.

Prediction: Kings score the game's first goal 9:07 into the first period, where the shots will be Kings 5.1, Ducks 3.6.  Nevertheless, Ducks pull it out by working their way out of a later-game tied situation.  Ducks 4, Kings 2. Goals by Ebbett, Perry, Pahlsson, and Moen.

Ducks Go. (that's kind of the opposite)