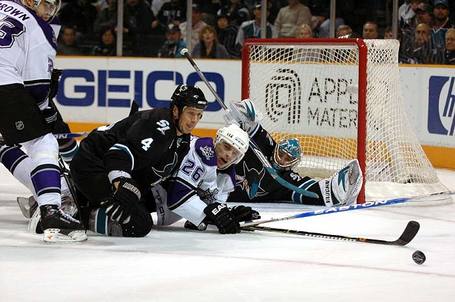 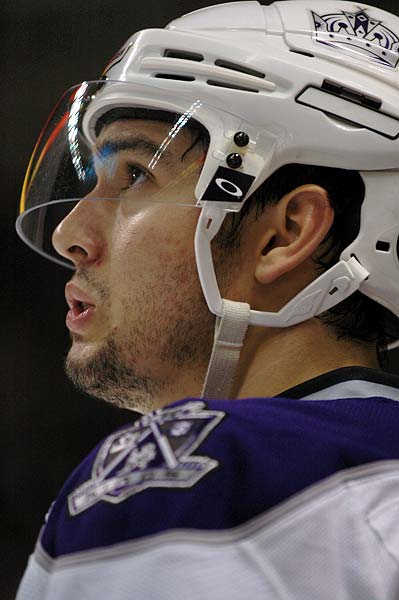 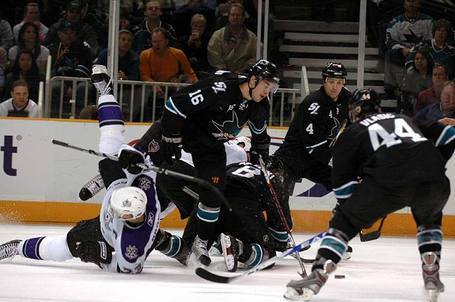 Here are a few photos from San Jose's 4-2 win over the Los Angeles Kings last night at HP Pavilion. Jack Johnson looked to take the title of Captain Elbow from Chris Pronger, delivering an elbow to the head of Christian Ehrhoff 3 feet in front of a referee in the second period. Gauthier also ran Patrick Marleau's head into the glass with time ticking down in the third, after Calgary in the playoffs last year that could set off an instant team wide scrum. In back-to-back games with teams physically challenging San Jose, it was interesting to see the Sharks response. They did not overreact. They let the refs sort it out, although there were several verbal confrontations that may lead to heated games down the line. No Jonathan Quick, instead the Kings started Ersberg. I think at this point Los Angeles is trying to hide him from me.

Dan Boyle and Christian Ehrhoff on the blueline could be the best skating defensive pair in the NHL. Pavelski's assist gives him a 5 game point streak (4G,1A), he also finished 14-3 on faceoffs and lead the team blocking 4 shots. No TV for Los Angeles, no LA Times or Daily News reporters attended the game either. Brad Lukowich and Jeremy Roenick may return Sat against Atlanta, Mitchell and Goc are longer term. Tomas Plihal is close to returning as well.

More photos and notes from the game are up here.