Share All sharing options for: Ducks Gameday—Versus mistakenly opts for a Ducks game

Well, for the only time this season, a SoCal team has made its way onto Versus.  I hope some scheduling intern got fired for that oversight.  Still, any possibility of watching a Ducks game without Brian Hayward is promising -- perhaps I should bite my tongue. 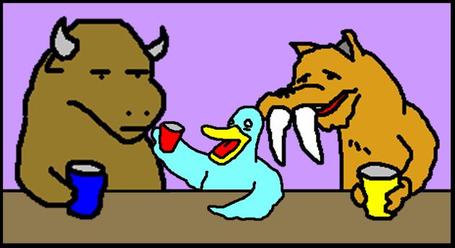 Continuing on my lazy streak, here's an old cartoon that seemingly applies.

I'm still all over the place when it comes to the Ducks and this year's trade deadline. We saw two pieces yesterday hit the FanShots -- one effectively saying it's trade time for GM Murray and one saying the Ducks should trade away nobody -- and really, both perspectives have merit.  It's certainly a complicated situation with a few unknowns, one of the primary questions being "What sort of GM is Bob Murray?"

We'll see -- ultimately I'm not hugely troubled either way -- it seems if the Ducks hold fast to their UFAs + Pronger, that's probably not optimal but it's hardly tragic: it pegs Murray as an optimist and we'll see what he can pull off in the summertime.  If Murray gets hell-bent on shuffling players out the door in the next week-plus, then he's more of a realist, but I think he's in a favorable trade position.  Even if he moves Pronger, seemingly it should be some good return: it's a public auction with enough desperate bidders and an Anaheim fanbase that will care a lot about the optics of a Pronger trade -- I don't think it's a scenario where Murray will get scammed in any strong sense.

And in the meantime, there's still some desperate stretch hockey to play.  I do need to rediscover an appreciation for these fight-tooth-and-nail desperation games.  It's certainly not every year that late-season games are this stressfully meaningful.

Prediction:  The score will be Ducks 2, Sabres 1, before Versus wises up and switches to show the Capitals-Flyers game.  Goals to that point by Pahlsson (despite not playing) and Ebbett.