First off, hats off to James Mirtle and the SBN megamonster for a couple of items: 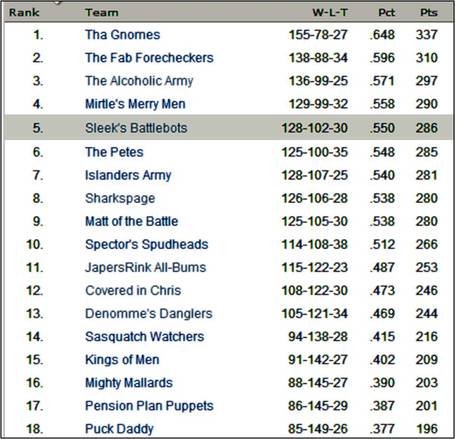 More after the break...

The Ducks are in Boston today for another desperate grab for two points -- I should be around the comments for the second period, I think.  It's going to be tough, of course; the Bruins remain solidly atop the east, and even though they've only won two of their last eight, they've still managed to outscore their opposition over that stretch 21-20 (pre-shootout).  But still, there's hope for the web-footed ones, because ignoring the Bruins' lofty standings position, they still do play in the eastern conference.

I titled today's post "Stupid East Coast", not only just to follow up Rudy's post title yesterday, but also to show how the discrepancy between the two conferences has played out in head-to-head regular season matchups since the lockout.  For the Ducks today, the first table is really what applies, but it's worth noting in the rare east-vs-west showdown how much better western teams utilize home ice (and yes, this includes the Kings' loss last night).

So in the 325 regular season incidents where an eastern team has hosted a western team since the lockout, the home team has won 162 times and the visitor has won 163.  The visiting west also has a slight edge in goal-scoring and special teams.  It's a slight trend, but every year since the lockout the west has improved its visitor winning percentage, while the east at home has slightly deteriorated.  It's much more a toss-up than when eastern teams visit western ones -- there you can notice a clear home ice advantage.  As I mentioned, these tables only include the regular season, but in the three post-lockout Cup Final series, the SCF win tally is West 11, East 7.

Of course, this is only statistical comfort on a global east vs. west basis, not so much on a specific Boston vs. Anaheim basis, but whatever.  I don't mind trusting it for one day.  Besides, with this year's Anaheim team, I am no more afraid of Boston than I am the NY Islanders or Tampa Bay -- no matter the opposition, the Ducks turn every game into a coin flip.

One last note: Not only do I still not know what the correct course of action is for GM Murray in the week leading up to the trade deadline, but I'm not sure that I'll ever know.  I've come to the conclusion that the correct decision (who to sell / who to keep, see Karen Francis' selections) is extremely dependent on a conversation with Scott Niedermayer, which is something you or I or Eklund really won't be privy to.  The huge question is really at what price would Scotty be willing to play another year in Anaheim -- if that answer is satisfactorily affordable, AND if the right package is offered, then I could see a logical Pronger trade.  For now, though, I don't see Pronger as an obvious move -- there's still 10 UFAs that should have more priority, though Pahlsson and his mono and Moen and his new baby might be exempt.  As usual, we shal see...

Prediction: A second straight game without Brian Hayward?  This must be what heaven is like.  Ducks 5, UCLA 3.  Goals by Ryan x2, Perry, Pahlsson, and Salcido.