Here's a glance at how things shake up after the Ryan Whitney trade, just to keep in mind as the trade deadline approaches.  Amounts courtesy of nhlnumbers.com. 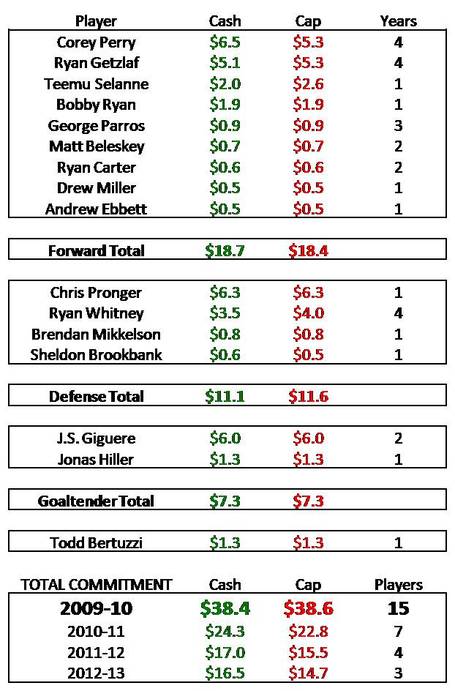 One thing that drives me a little crazy about the Pronger trade rumors is the notion that the Ducks somehow need to move Captain Elbows because he doesn't fit into their salary structure somehow.  Nonsense.  Pronger may move, but it had better be because of an opportunity to fill out the roster above, which still very much has a "clean slate" feel to it.  This summer will be very interesting, to say the least -- and that's coming from a guy whose last few summers have involved semi-retirements and salary cap ceilings.  Hang on to your hats and glasses.

Prediction: Huge game today between the Ducks and Stars, plus later will be the Oilers hosting the Wild.  All four teams enter today with 65 points, so it's essentially Bubble Saturday -- a regulation decision becomes huge.  Ducks 4, Stars 2.  Goals by Perry, Getzlaf, Pahlsson (disguised as Moen), and Brookbank.