Well, despite allowing the opening goal in each game since the ASG break, the Ducks have fashioned a respectable 3-1 Year of the Ox record, which they'll need to maintain if they want to attend the postseason. Tonight they'll play a game in Minnesota before traveling to Nashville for another game tomorrow (another curious back-to-back for the team that has played more games than anyone else in the league). 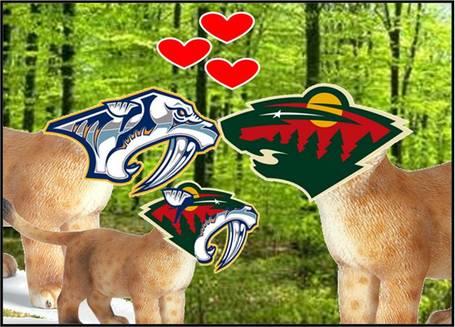 Nothing like a Wild-Predators back-to-back road trip to make me draw something stupid.

In tragic news, Sammy Pahlsson has a viral infection and will be out the next two weeks. This is of course devastating, probably more for me than anyone, but perhaps there is a bright side. Bob Murray -- I am hereby charging you to take advantage of Pahlsson's two weeks of medicated thinking to trick sign the Swede to a multi-year contract extension.  If Pahlsson can get re-upped before the trade deadline, that would make my nights a lot more sleep-filled, and probably clarifies what moves the Ducks should make in the next month.

Also, apparently the Ducks have acquired Sheldon Brookbank from the Devils for some kid named McIntyre.  The only reason that's semi-significant at all is because he plays defense, he fights, and he's signed cheaply next year.

Prediction: Ducks 3, Wild 2.  Goals by whoever can best channel the pre-viral spirit of Sammy Pahlsson.  Giguere (if he plays) allows as many Wild goals as he did in the 2003 and 2007 postseasons combined.