Share All sharing options for: Hockey and professional wrestling 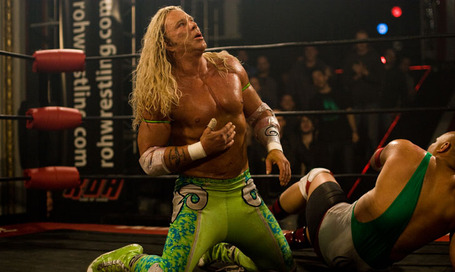 Who's a better match for Randy "The Ram" in hockey: Claude Lemieux (for the "he's STILL hanging around?" factor) or Alexander Daigle (to cover the "fall from grace" element)?

Last week, professional wrestling showed its tanned, steroid-grown head in three different BoC posts. Considering the fact that the Dallas Stars pounded their opponents this weekend (a stunning 10-2 win against the New York Rangers and a 4-1 win in Nashville), you couldn't help but be reminded of the way a big-name wrestler would destroy a jobber.

It got me thinking: which moments, players and types of games in hockey mimic some of the most well-known figures and events in professional wrestling? While BoC's wrestling references will never be able touch this post by the Pensblog, let's take one more trip into the world of choke slams and chair-shots.

Finding a good match for the 10-2 beating: Professional wrestling could offer many different options for historically one-sided bouts. Could the Stars' drubbing of the Rangers be similar to that Hell in a Cell match when Mick Foley somehow didn't die three or four times? Or was it that one time that The Rock hit Foley with a million chair-shots? (Seriously, is there anyone who's taken as many "fake but you know what, that had to hurt at least a little bit" type beatings than Foley? Guy's just a pain sponge)

If you've never seen the Foley stunt, it starts around the 1:10 mark:

As great as an example as those might be, the Stars 10-2 win was most like a casket match. Especially if the rumors of a Tom Renney firing come true.

"I Quit" match: Easily, the hockey equivalent of an I Quit match came in that infamous moment: Patrick Roy whispering not-so-sweet nothings in the ear of Montreal Canadiens executives after getting shelled by the Red Wings. 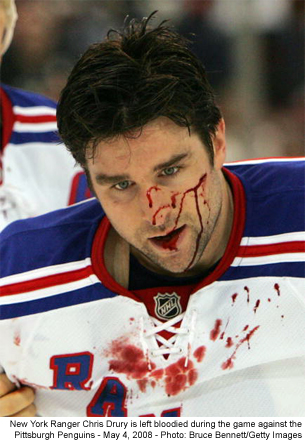 Oh no! He swung at The Oxy-cuter but ended up knocking out the referee!: Take your pick for those "ref gets knocked out" moments in hockey.

Would you prefer the season after the lockout, when referees were whistle-trigger happy? Or the opposite, when a player must be mugged to draw a penalty toward the end of a playoff game?

Here's how it would happen in hockey: Dion Phaneuf lines up Sean Avery with hopes of Phaneuf-ing* the Outspoken One, only Avery pushes a linesman in the way at the last minute. Go ahead and try to say that wouldn't be entertaining.

The Hulkster wags his finger, becomes impervious to pain/dishonest with himself about hair loss and lands the big leg drop: Considering that "no lead is safe in hockey" there are plenty of decent examples.

But the best example came to me instantly: Paul Kariya's "breath fogging the visor" performance in that game 6 SCF matchup against noted villain "Psycho" Scott Stevens. (Would that make Kariya's finishing move "The Sharpshooter" ...?) 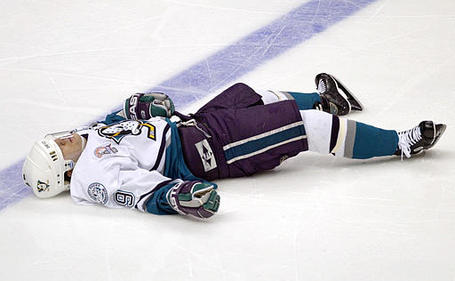 Villain wins by: hooking the tights, putting his legs on the ropes for leverage or has his manager hold the opponent's legs down unbeknownst to the referee:

One of the best things about wrestling are the moments when the crowd gets legitimately pissed. The greatest way to do that is to have the heel (aka bad guy) get destroyed but then somehow sneak away with a win. Usually by unfair means.

Really, this applies to many games when the home crowd goes away disappointed. The closest famous example isn't a perfect mix, but the Hull foot in the crease goal is about the closest match that comes to mind.

The People's Elbow: The inevitable Chris Pronger joke. In an ode to both The Rock and Pensblog, Pronger would transform into The Prong and constantly refer to his flatulence, greatness and self in the third person.

Vince McMahon: Nah, let's not insult the comical owner of the WWE (ugh, haven't watched since the name change ... come on, really, World Wildlife Foundation?) with a comparison to Gary Bettman. 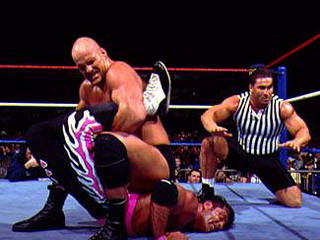 "Stone Cold" Steve Austin vs. "The Hitman" Bret Hart: Not a bad parallel to the Alex Ovechkin vs. Sidney Crosby rivalry when you think about it. Austin/Ovechkin appeal to the simple fan with brashness and aggressiveness; Hart/Crosby are vaguely whiny, undeniably talented Canadians. Crosby might even have a disturbing obsession with baby oil and strange sunglasses for all we know.

* - I'd say that I'm jealous that Phaneuf's name became verb-icized, but then again the verb named after me would probably be for taking way too long to make a point (or something much worse).

So, those are the wrestling-hockey connections that come to mind but there must be more. I'm excited to see what whacky parallels show up in the comments.