Share All sharing options for: Ducks Gameday—First impressions on the new Ducks

Anaheim Ducks (whatever) at Phoenix Coyotes (whatever)
For a canine angle, head to Five For Howling.

Well, now I've seen the new acquisitions play two home games, and I have to say they're not bad. In fact, other than my Pahlsson man-crush, I'm not sure that there's a trade that I feel rotten about, though certainly two games isn't a lot to base that on.

Still, I guess let's take a quick look at the Final Four:

Ryan Whitney
Possible nicknames: Cotton Gin, Eli Whitney, Half-Whit
Initial impressions: I think I like the idea of Ryan Whitney, we just shouldn't expect very much use out of the big body to crush opponents.  He does, however, seem to have a good package of reach, mobility, and puck skills, and it seems reasonable to think that he'll improve some as he gets adjusted.  Probably not a guy we want to see against the opposition's top scorers, but that's fine.  There's still value in playing easy minutes well.

James Wisniewski
Possible nicknames: Vishnevski, The Wiz, The Wizard of Niewski
Initial impressions: Not sure what to think of the new version of Vishdog just yet -- he seems decently versatile, though, and doesn't look out of place with Scotty Niedermayer as a partner.  I haven't noticed him a ton (though he did show good patience in setting up Ebbett's goal last night), to tell the truth, but that's probably not a bad thing for a new d-man.  And just like Eli Whitney, you can't properly spell the Wiz's last name without the letters "W-I-N".

Erik Christensen
Possible nicknames: Fake-Pahlsson, E.C. Bias, Hans Christian Andersen
Initial impressions: A decent fill-in on the scoring lines, sort of our poor man's Kunitz.  He's a guy that I've heard shaky reports about both from Thrasher fans and Ducks fans who saw his first few games, but in the two games I've watched he's been a good passenger.  I'd like to assign him a reasonable nickname, but whenever I see him on the ice, so far all I can call him is "fake Pahlsson" -- damn that deceptive #26.

Petteri Nokelainen
Possible nicknames: Nickelodeon, Nick Jr., Nick at Nite
Initial impressions: Seems like a good depth player and has fit in pretty well on a stopper line which no longer features Pahlsson or Moen.  Again, I'm somewhat reliant on what I've heard about the Nokester, but he's put himself in solid position most of the two games I've observed, and doesn't seem afraid of the front of the net on either end of the ice.  Generally, it's nice to see a European forward on the Ducks not named Selanne or Pahlsson, so he's also got that going for him.

We'll see where these guys really do fit into the present and future versions of the Ducks, but based on early impressions, I do like Bob Murray's deadline day.  Picked up some useful pieces in his UFA firesale, which at least speaks to his decisiveness and realism.  Going into next week I'll take a look at the go-forward roster and try to guess what this team will do this summer to avoid a repeat of this crap-the-bed season.

Feel free to leave your impressions (plus any nickname suggestions) in the comments -- I won't be around for tonight's game, btw, but feel free to visit the comments for that as well.

And now, an update on our old theme of "The Art of Suicide", drawn by Spade after we went to Sunday's game together. 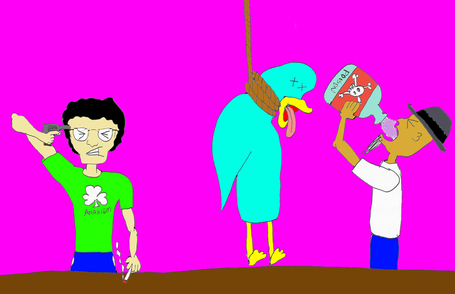 A logical update to his previous Earl/Duck/Spade cartoon.

Sorry, Spade, I did have to throw this after the jump, just in case my folks were perusing the ol' BoC.  Still, I'm guessing this won't be the last we'll see of this cartoon series.

Prediction: I finally set my sights on the Ducks losing, and they win?!  They'll get it right tonight, though.  'Yotes 4, Ducks 3.  Goals by Nick at Nite, Fake-Pahlsson, and Vishdog 2.0.