Well, with eleven games left I decided to run a quick set of scenarios about how the Ducks might finish out their 08-09 season. I really don't know how many points they'd need to qualify (Mirtle says 16), but here's a look at how many they might get.

The first set of tables below breaks down how the Ducks have done against each remaining opponent in the regular season, both since the lockout and just for this 08-09 season. In both projections, the Ducks figure to get about 13 points from their remaining 11 games.

The second set of tables factors the Home/Road indicator into the projections -- how well has Anaheim done against each opponent when considering where the game will be played? That's a little more stark -- 10 to 12 points seems to be the indication there. 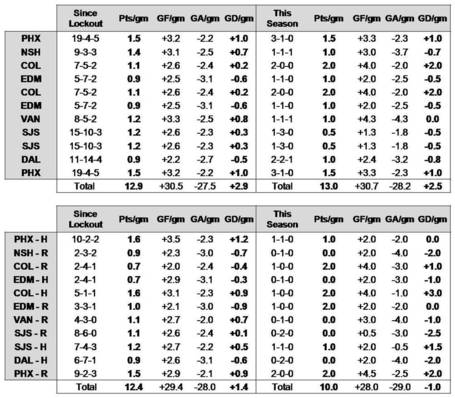 Of course, the Ducks are about as predictable as monkeys these days -- they seemingly exist to defy expectation, and certainly are a different team than they've been most of the post-lockout era, but it still shows some notable trends.  First off, the Ducks have yet to take any standings points this season in Nashville, Vancouver, or San Jose, or when hosting Edmonton or Dallas.  That's no good.  Secondly, all the scenarios suggest that the Ducks need a win tonight, and generally Anaheim will need to continue playing above expectation if they want to see a game 83 this year.

Prediction: I won't be around for the start of the game, but I'll join in somewhere in the middle.  Ducks lose 3-2 and blow my spreadsheet to bits.  Goals by Pahlsson (the real one somehow) and Rob Niedermayer.