Share All sharing options for: Ducks Gameday—Ten games to go, an intriguing opportunity

I really don't know how it happened -- a little more than a week ago, after the Ducks lost to the Sharks, I gave the season up for dead.  And even though the team's problems don't seem remarkably fixed even in the past week, here they sit -- one point out of eighth with ten games to play. 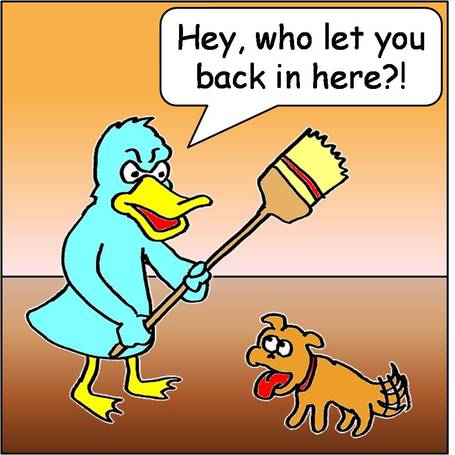 In this metaphor, Positivity is a pesky dog starving for approval.

But I'm not on the positivity bandwagon just yet -- it's already backstabbed me a few times this season, and I've rather enjoyed this past week where all I stressed about was Galactica (Starbuck WTF?).  So even as the Ducks have the opportunity tonight to leapfrog the Predators into eighth, I'm taking it all with a huge grain of salt.  Namely, that this Ducks team hasn't shown itself capable of consistent winning, not in a long while.

That's not to say that they can't pull it off this time (and that would be welcome), just that even recently, results seemingly have been mediocre as ever.  More after the jump.

In some cases (such as the 2005-06 or 2007-08 Ducks teams), a team towards the end of the season can be playing better than its record -- that is to say a team could have "turned it on" and played stellar hockey over its recent 20 or 10 games. I don't see that in the numbers for this Ducks squad, though. Take a look at the 15 teams in the west and how they've each fared over the past 20 games: 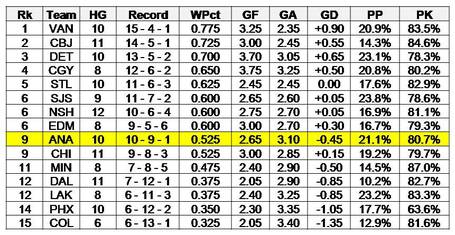 Looking back at the last 20 games, it's not like the Ducks have been anything special.  They've had a pretty good power play but have been generally outscored -- not much to suggest that their current position is in any way misleading or that they're much different than they were over the first 50 or so games.  Similarly, here's the same table only looking back 10 games: 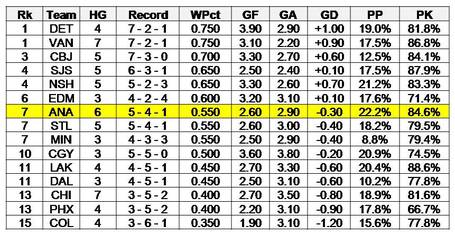 With the more recent cut, the ten-game lookback shows a slightly better ranking in the west, but still nothing very flattering, especially considering that only a couple western teams played a majority of their last ten games at home.

So it seems that this recent surge back towards contention, and generally this entire season, has been the result of repeatedly staying mediocre,  Perhaps the Ducks have truly turned a corner in the past week, and perhaps we'll see that the team can turn it on when it really really really counts and shed the shackles of mediocrity, and truly I have nothing against that happening -- my point is really that it's not necessarily indicated by their recent play.

One specific area that could use some improvement?  In the seven games since the trade deadline, Ryan Getzlaf, Corey Perry, and Eric Cristensen have been surrendering even-strength goals at twice the rate that Todd Marchant, Petteri Nokelainen, and Mike Brown have been surrendering goals while shorthanded.  The Ducks seemingly would find some easier success if they could stem some of the GA-bleeding from the top line.