Share All sharing options for: Ducks Gameday—Nine games to go, a frightening opponent

I am so goddamn scared, I tell you.  On the one hand, the Ducks have miraculously gotten exactly where we want 'em, holding tight to that eighth spot with nine games left to play -- the hope of a postseason BoC isn't dead yet.  On the other hand, though, the Ducks travel to play the 15th-place Avalanche tonight, and while that seems somewhat promising, the Ducks haven't been a great team at taking "easy" points.  In fact, if you look at Anaheim's record this year against bottom-ish teams (ATL, COL, DAL, LAK, NYI, PHX, TBL, TOR), the Ducks have won 8 games in regulation and their opponents have won 9. 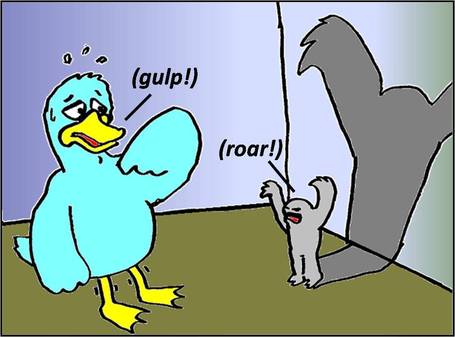 Yeah, that's my rendition of a little yeti with a big shadow.  Deal with it.

But I dunno, maybe all the Ducks needed was some late-season Sleek pessimism to get 'em over their speedbumps -- here's my gameday predictions for the last four games:

NSH@ANA
Prediction: At this point, my main focus isn't winning -- the Ducks are probably better off looking at how they can end the season below the Kings in the standings (for a better draft position). Ducks 2, Predators 4. Goals by Tigh and Hera.

ANA@PHX
Prediction: I finally set my sights on the Ducks losing, and they win?! They'll get it right tonight, though. 'Yotes 4, Ducks 3. Goals by Nick at Nite, Fake-Pahlsson, and Vishdog 2.0.

PHX@ANA
Prediction: I won't be around for the start of the game, but I'll join in somewhere in the middle. Ducks lose 3-2 and blow my spreadsheet to bits. Goals by Pahlsson (the real one somehow) and Rob Niedermayer.

Largely out of character (I think this matches the total number of losses I predicted in the prior 2 1/2 seasons of gameday posts), but it's a post-Pahlsson universe now, and I can gladly be wrong each and every damn time...well, until the first time it really fails me.

Prediction: Avs 3, Ducks 2.  Goals by the Wizard of Niewski and the Prince of Onger.  I'm iffy on the comments tonight -- if I do make an appearance, it'll probably be towards the end of the game.