Edmonton Oilers (bubble) at Anaheim Ducks (bubble)
Unbelievably, SBN has no Oilers blog. That seems ironic because when I started blogging, the hockey blogosphere was 92% Oilers-based. Go see Tyler, I guess.

This is why the NHL needs to switch to a 74-game season.  Immediately. 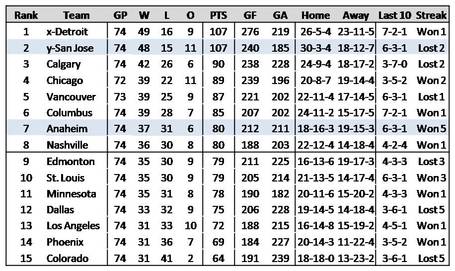 Numbers lifted straight from the pages of TSN.ca

The Ducks sit with a truly thin margin on the five-team bubble, which at least offers the assurance that if everyone ended with the same last-eight record, they'd hold 7th.  In order to get passed, Anaheim needs to be outperformed.  A quick look at the bubble's final-eight game schedules after the break.

Here's a table that shows the final eight games for the five teams in question: 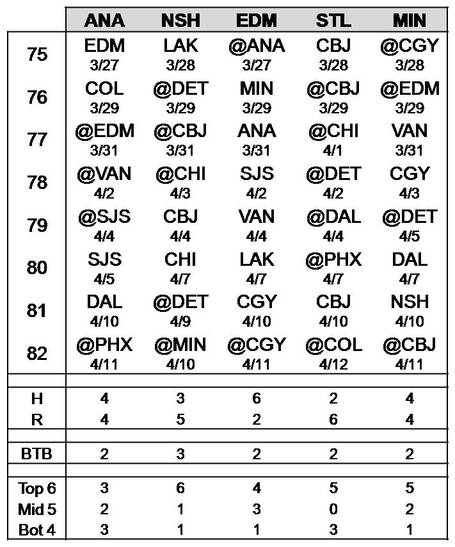 Feel free to leave any more observations, predictions, or random thoughts in the comments.

Lastly, I wanted to throw a quick table to show some numbers for Nickelodeon's impressive first nine games in Anaheim, and I'm even going to compare it to some lofty results -- Pahlsson's 2007 cup run.  Now Nokelainen isn't quite at the level of minutes-played or level of competition that Pahlsson had in the cup run, but it's similar.  Largely ignore the power play line -- mostly what matters is the even-strength and shorthanded comparisons.

Pahlsson still holds the edge in points-per-hour and goal-differential-per-hour, but Nokelainen is not that far off in either manpower situation.  It's still early, of course, and Nokester is still getting acclimated, but so far it's been promising -- he's outscoring some tough-ish opposition and in more than 108 even-strength minutes, Nokelainen has only been on the ice for one goal against.  Nice work, kid.

Prediction: As noted, Anaheim holds its fate in its own hands, which hasn't boded well all season.  I'm ready for the letdown.  Oilers 4, Ducks 2 (wink).  Goals by the Finns -- Nokelainen and Selanne.