Ducks Gameday—Six games to go, time to make a stand

Share All sharing options for: Ducks Gameday—Six games to go, time to make a stand

Well, the Ducks get another opportunity to bubble-battle with the Oilers tonight, this time on the road; smart money is that Jonas Hiller will play a full game tonight. With both teams currently sitting outside the top eight, it's a hugely critical game for both teams, and it truly is time for the Ducks to step up and confront these pesky Oilboys. 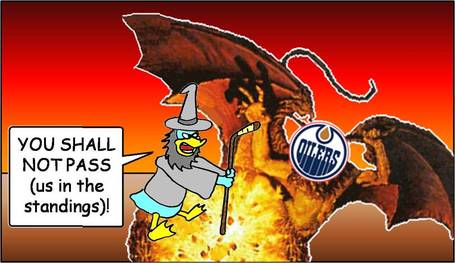 Quickly, I also did want to give some post-trade-deadline kudos to GM Bob Murray, who not only dealt away a boatload of UFAs a month ago to bolster Anaheim's future, but also managed to stay afloat in terms of current-year production as well.  Sure, Chris Kunitz has been scoring like a mad fool in Pittsburgh, but taken as a group Anaheim's acquisitions have held pace pretty well with its departed fivesome (note that Kent Huskins hasn't played a game yet for the Sharks):

Acquisitions: one fewer point in six fewer games-played. Not too bad, Murray.

I won't be in the comments until probably after this game is over, so hopefully the Gandalf magic does the trick.

Go Ducks (and for tonight, go Blue Jackets and Canucks).