Share All sharing options for: You ripped out my heart and sent it to Chicago -- Sleek reacts to Anaheim's deadline day

So, how was your deadline day?  Did you get kicked as squarely in the nuts as I did?

This would normally be the time that I'd sit down, take a deep breath, write up some fine memories and a scouting report for each departing player (sort of like I did with Chris Kunitz), and then tell all you Ducks fans why we'll be all right.  And eventually I will, but here's the thing -- I'm also about to get on a plane and take off for Hawaii for a week of relaxing vacation, where hockey is little more than a distant echo. 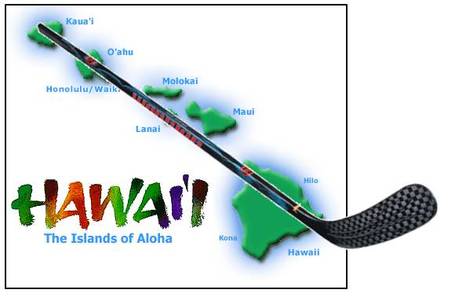 So for now, I'm going to do a bit of a hasty run-through of today's moves (after the jump), but I'll warn you: I'm not giving any of these guys a proper farewell, at least not yet. And perhaps that's where you BoC readers can help me out.

On the right sidebar is the Fanpost feature, where anybody can write a post about anything -- pictures, YouTubes, and more can be included, if you're willing to figure out the bells and whistles.  If you feel inspired at any point in the next week, why not offer a farewell piece about one of the following players -- Kunitz, Pahlsson, Moen, Huskins, Montador, or Morrison?  It doesn't have to be much (and it can be about as few or as many of these players as you wish), either a favorite moment, or who you'll miss the most, or a scouting report -- whatever you want, really.  You don't even have to be a Ducks fan, necessarily -- if there's somebody you appreciated as an opponent, that's fine as well.  It's typical BoC freedom.

I don't really know how much internet or inclination I'll have in Hawaii, so it's possible I go dark for a week, but I'll probably stop by.  I've arranged for James O'Brien to handle the gameday post for Dallas on Friday, as it's a biggie, but beyond that no promises.  And be a bit patient when I get back, too -- it's probable that most of you will see the new acquisitions play three times before I see 'em once.

So read on for a whirlwind initial set of good-byes, write a FanPost if you feel led, and I'll bring some "I've had a week to stew on this" reaction when I return. 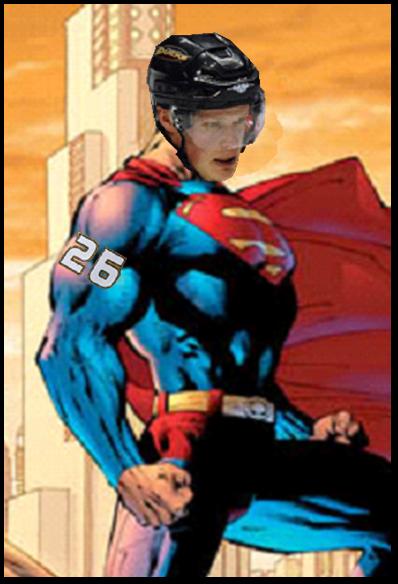 Sammy Pahlsson, you're my hero.

I've started with my favorite player, of course, and if you read nothing else from the archives, make sure you click on the Poetry Corner piece -- that still sums up the things I love about Pahlsson's game.  I'm not going to use any spreadsheets right now, but essentially Sammy took the toughest assignments in the league the last few years -- both at even-strength and on the penalty kill -- and specialized in shutting down the opponents' best players.  Look at the 2007 postseason: in an attempt to escape Sammy's relentless checking, Gaborik got split from Demitra, Sedin got split from Sedin, Zetterberg got split from Datsyuk, and Alfredsson got split from Heatley.  He arguably deserved the Conn Smythe trophy that spring.

Sammy was Anaheim's longest-tenured Duck (he literally made his debut the day before Giguere), played in every postseason game that Anaheim had this decade, never said a word, and worked his tail off every shift.  There's a reason why they call him "God" at HF Boards, and there's a reason why Pahlsson is featured in every prediction I make -- he's not going to score a bunch, but he's regularly one of the best players on the ice.

I could have handled a lot of moves today, but Pahlsson is a kick to the gut.  It may be the right move, but for now, I'm depressed.  You're the best, Sammy. 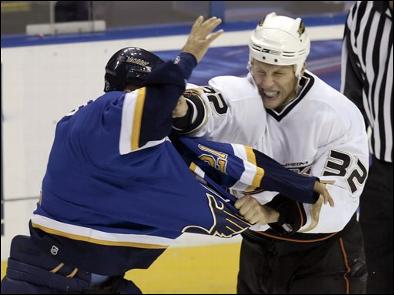 The Omen Strikes Back.

From the BoC archives: The best two even-strength forward lines for the Ducks, If you can't fight because you have a broken hand...

First, let's talk a bit about the Omen, who had my favorite nickname on the Ducks, and probably would have assumed Pahlsson's place in the gameday predictions.  The Omen has been a big part in a lot of what I've written about Pahlsson in the past, which is pretty awesome considering when he first showed up on the Ducks, I thought his only talent was taking a punch to the face.  But how quickly Moen progressed -- pretty soon I was saying, "Well, I'm not afraid when Moen's on the ice", and soon enough he was a capable member of the shutdown line.

The Omen is a farmer by birth, and he brings that workmanlike attitude to hockey.  He's not terribly offensively blessed (though I've seen him try many impressive moves -- his vision might be ahead of his hands), but does score big playoff crash-the-net goals.  In the 2007 playoffs he was especially heroic, t-2nd on the team in goals (scored more than Teemu and Kunitz combined) and t-1st on the team in game-winning goals (including the cup-winning goal, though that was scored by Chris Phillips).  In fact, Pahlsson and Moen combined for 3 of Anaheim's 4 game-winning goals in the cup finals.

He stands up for his teammates, plays a safe game, puts in an honest effort, and scores huge goals -- the Sharks are damn lucky to have him this spring. 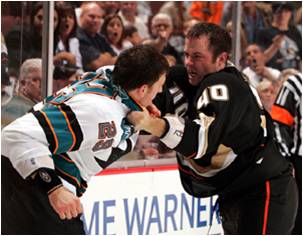 From the BoC archives: Quick impressions from the preseason opener, A letter from Kent Huskins

Kent Huskins is a bit of a different story -- he was on the cup roster, but played a very depth role -- and that's probably where he belongs.  Still, it's not hard to like Huskins (especially if you read Rudy's letter linked above) so long as he's a bottom-pairing guy, which is assumedly where the Sharks would play him.

We're a bit spoiled in Anaheim when it comes to defenders, so maybe the bar is set a bit high, but still there was no disappointment in Huskins.  He was solid enough in his sheltered minutes, and every once in a while he would pull off a spectacular 1-on-5 deke and stun the building (this is actually what I think of as "Huskins Time").  In terms of defenseman development, Huskins still feels pretty young -- he probably doesn't have the highest ceiling, but I think he's still improving. 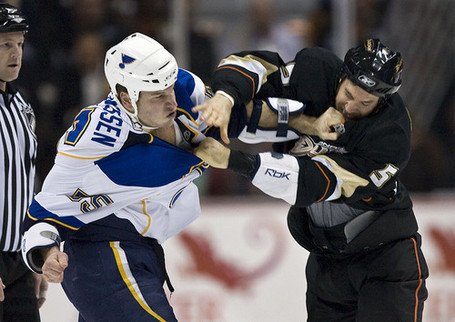 Ah, finally somebody gets moved who didn't win a cup in Anaheim.  Montador was signed to a one-year deal last summer at a real discount, and definitely earned his money in Anaheim.  I really didn't know much about his game until he arrived, but I was pleasantly surprised by both his fists and his on-ice play.  He's ultra-team-first, tough and smart, surprisingly mobile, and decent with the puck.  No terrible weaknesses, either.

He led the Ducks in both penalty minutes and plus-minus this season (though the latter stat was mostly because he played Getzlaf-Perry minutes).  He could play on the second power play unit, and even was able to goad Jumbo Joe Thornton into a fight.  The Bruins got themselves a really useful player, and in fact I think they're more playoff-ready now than if they used Phil Kessel to land Chris Pronger. 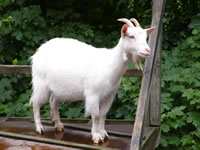 I figured this photo was appropriate, based on BoC comments

From the BoC archives: B-Mo!  Burke upgrades through the West Coast Exchange

Poor, poor Morrison.  I used the image of the scapegoat because he quickly got the cold shoulder in Anaheim thanks to a generally awful start.  He was coming off surgery and probably returned to the ice too soon, and Ducks fans couldn't get past the price tag (never mind that he gave Anaheim a discount) and the reduced production.

Still, I've been an adamant B-Mo supporter throughout the struggles -- he still is a solid defensive center that is warming into his old game, and while the $2.75M bet last summer doesn't look so hot, that doesn't mean I wouldn't take the $600k bet for the remainder of the year.  I think he'll be a good depth center for the Stars, not a show-stopper but still a solid player.

I never heard him grumble in Anaheim, either -- even when things were sour.  And say what you will, he played a pretty darn good game in Chicago after finding out he'd been waived.  That's professionalism right there.

I've never heard of Eric O'Dell, but I figured I'd be thorough.

So that's all you get from me today, and even that took longer than expected (I hope I remember to pack everything now).  Overall, I'll just say this: Bob Murray took over Brian Burke's team last fall, essentially a cap-full roster that was set to expire at the end of the year.  If things went well, it was pretty expected that Murray would ride out the roster through the playoffs -- there wasn't much wiggle room for moves.  But that never really happened -- even when all the players were healthy, the team stayed decidedly mediocre.  Did GM Murray go overboard today?  Probably not -- he took a realistic look at the team and took steps to evolve from Burke's team yesterday to Murray's team tomorrow.  Does that mean that today doesn't hurt like a motherfucker?  It hurts pretty bad.

But now the stakes are raised for what Murray wants to do this summer -- that's when we get to see what he would rather spend money on, and that's when we get to put a proper judgment on what happened today.  As for the rest of this season?  It'll be weird, sure, but the top of the roster is intact and there's some new blood in the mix -- I'm not sure that the playoff odds have been terribly shifted.

Too bad I won't be around until next week to see it.  Don't forget to FanPost!