Ducks Gameday: It Feels So Good to Say, "Ducks Suck"

Share All sharing options for: Ducks Gameday: It Feels So Good to Say, "Ducks Suck"

5:00 PST, Fox Sports Prime Ticket (like anyone would want to watch)

Surprise, cockfags!  Earl is sitting on a rock, watching the sunset and pondering his future without Sammy Pahlsson,* so I am going to chip in for today's Ducks post.  So, the Ducks... sure do suck, don't they?  The team that was supposed to finish anywhere from 4th to 6th in the conference is languishing in 10th right now, behind Nashville and Columbus.  They're only 3 points better than some team called the Kings, who surely suck because I've never heard of them.  Basically, the Ducks are shitty and I couldn't be happier.

*And he's not wearing a shirt.  Gracious.

But why?  Why do the Ducks suck?  (Hey, that rhymes.)  It's not Ryan Getzlaf's fault; the young center is 10th in the league in points and it seems like he adds a point for every piece of hair he loses.  (He's like a reverse Sampson.)  It's probably not Corey Perry's fault, no matter how badly I wish it was, because he's been his usual harmless self.  Also, doesn't he look like one of the little aliens from Mars Attacks?  Maybe that's just me.  I think the problem with the Ducks isn't any of their big players (well, maybe Scott Niedermayer), it's everyone else.  The salary cap makes it harder to retain the 2nd-tier talent and the Ducks have seen Andy Mac, Todd Bertuzzi, Dustin Penner, Mathieu Schneider, Sean O'Donnell, and a few other people I can't remember because I'm too lazy to look it up leave with lesser lights to replace them.  Eventually that hole is going to get too big and you're going to end up where the Ducks are. 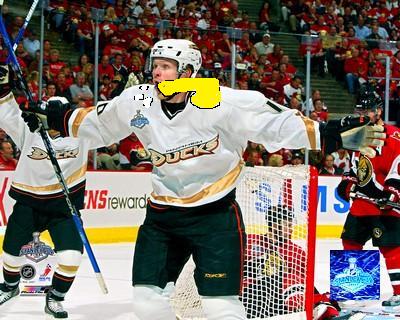 You know how Dean Lombardi loves his boxes?  I love windows.  I'm always fascinated by a team's opportunity to win a Cup and examine them whenever possible.  (I'm not very much fun at parties.)  The Ducks are seeing their window close after a few years of dominance, but they're in luck: I think, in this new NHL, windows open and close in a matter of years.  The NHL is going to be more like the NFL in coming years, where teams go from contenders to laughinstocks and back again, with the Ducks leading the charge.  I think Brian Burke understood that, which is why he left the Ducks with so much flexibility this off-season.  The Ducks will probably miss the playoffs next year too (unless their young defensemen suddenly figure it out), but eventually they'll get a few supporting players to help Getzlaf, Perry, Ryan, and Pronger get back to the playoffs.  Dammit.