Ducks Gameday—Two games to go, the bubble marches on without Edmonton

Share All sharing options for: Ducks Gameday—Two games to go, the bubble marches on without Edmonton

Dallas Stars (golfin') at Anaheim Ducks (bubble)
Go to Defending Big D to find out how enjoyable it is to ruin a springtime in Anaheim.

This game matters still? Damn you, Detroit, and your Central-promoting ways.

Doesn't matter, I suppose. We win and we're in; we lose and I booze.  Simple as that.  Instead of writing about tonight's game, I thought I'd spend most of today's post devoted to a team that's no longer in the western conference bubble: the Edmonton Oilers.

It was only two weeks ago that the Oilers were real threats to make the playoffs -- fresh off a 51-save win in Anaheim, the top-eight Oilers were going to play their final seven games within the province of Alberta, six straight at Rexall then one at the Saddledome.

But that fell apart quickly -- they lost a key homestand-opener to the Wild, and then the BoC came into town and put the final three nails into the Oilers' coffin.  Though Edmonton did get two points against Vancouver, they couldn't muster any points from any of the visiting Ducks, Sharks, or Kings -- all within a week's span -- and that sealed their golf course fate.

Illustrated with help from our good friends at Sports Club Stats: 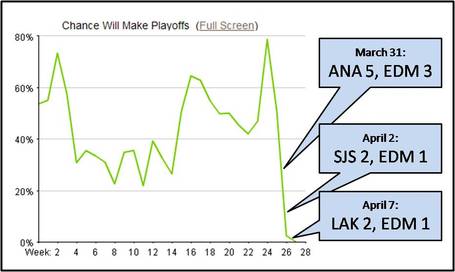 Don't get confused.  This has nothing to do with the stock market..

Now I do have to confess -- as much as the Ducks and Oilers have had to dispute over the last few years (2006 WCF, Chris Pronger, Dustin Penner, Lowe calling SoCal a "pathetic hockey market", etc.), I'm nevertheless a huge fan of the Oilers blogosphere -- they're basically the reason I'm a blogger today. Some of them have moved on, but BoA, CinO, mc79, IOF, Black Dog, LoweTide were (and are) all huge influences, and because of their writing I'll never be able to hate the Oilers the way I properly should as a Ducks fan.  It's a simple problem, really -- I know and like too many Oilers fans.

But seeing that a BoC road sweep has played such a quick-and-decisive role in ending one rival team's playoff hopes, I suppose I do have a bit of a reputation to maintain (I don't think I can avoid it -- for better or worse, it's my legacy). Make the jump if you must. 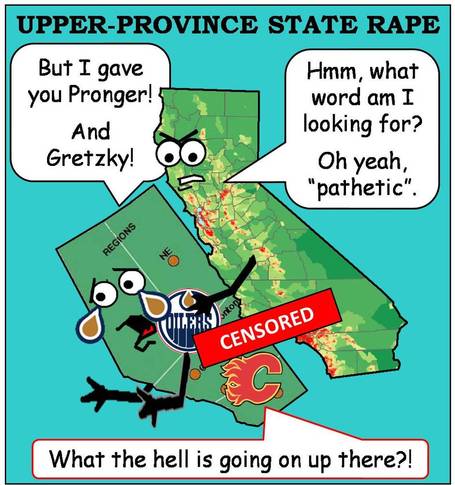 Let's hope this never comes back to haunt me.  See ya next year, Oilers!

Prediction: I won't be around for the comments tonight, but feel free to carry on.  Ducks 4, Stars 2.  Goals by Perry, Selanne, Marchant, and Frenchie Fucking Beauchemin.