There is so much to write about regarding the long-awaited Battle of California, I may as well start typing -- for now, I'm not even going to focusing on the rosters themselves, and just take a step back and reflect on what this series really means.

Just to lay the short-term history out there: Three years ago, the Sharks and Ducks each had home ice in the second round, and each were leading their series two-games-to-none (which prompted James Mirtle to start this blog to offset an already-popular Battle of Alberta).  Had the Sharks not then lost four straight games to the eighth-seeded Oilers, the BoC would have occurred in the WCF that spring; instead the Pronger-Oilers knocked out both clubs.  Two years ago, the Sharks and Ducks were also one round away from meeting -- the Ducks were in the process of eliminating Vancouver in the second round and the Sharks had a one-game-to-none lead over the Red Wings.  Detroit stormed back and prevented a WCF BoC, but the Ducks kept winning en route to California's first Stanley Cup.  Last spring was Anaheim's chance to blow it -- in the first round against the Dallas Stars they dropped their first two games at home and couldn't recover, and instead of a second-round BoC the Stars also upset the Sharks.  Three legitimate chances for a postseason BoC, and three instances where one of the teams failed to deliver and "get there".

So this year, it seems, Anaheim and San Jose left nothing to chance.  While the Sharks fended off the Wings and the Bruins for the President's Trophy all season, the Ducks swallowed their talent and surgically divebombed their way down to the 8th seed.  (By design?  Hardly, but it matters little now.)

In their collective history, they've met a total of 90 times during the regular season, plus a couple dozen preseason games, and as far back as I can remember the Ducks v Sharks match-ups have always featured intensity and pride.  But instead of a real rivalry, the Ducks-Sharks story (and hell, the BoC storyline) has been more about commonalities -- fans of both teams can associate with following a sport that's not locally mainstream, they can commiserate about frustration with the late-90s dominance of the Detroit-Dallas-Colorado western trio, and they are all-too familiar with the east coast bias which continues to dominate this sport's coverage (even if this series is a sweep, Versus will have shown as many postseason games featuring a CA team as it showed all regular season).  Sure, the Ducks/Sharks have enjoyed beating each other whenever their regular-season paths crossed, but up until now, victory has never been critical.

But now they are playing with real bullets and real blood -- one team's postseason's hopes will be crushed at the hand of the other.  Friendly association is over, at least in the short term, and now we have an opportunity for CA hockey fans to truly hate each other.  Even if the series turns out less-than-epic, CA fans can stop comparing notes about performances against other opponents and finally bring playoff hatred to the local rivalry -- we'll see, but this could be a huge step forward for hockey fandom in this state.

What do the Ducks have going for them?  On paper for sure they're the underdogs, but there's at least some signs of hope.  For one, the Ducks as a franchise have never been eliminated by a #1 seed (they beat the '03 Stars and the '07 Wings both in six games), and the Sharks have never beaten a #8 seed (lost to Pronger and the '06 Oilers in six).  Also, I think one recurring problem the Ducks have had this season is a sense of entitlement -- they often seem convinced that they are the better team, but don't always seem intent on demonstrating it on the ice.  I don't see this issue being a problem in a 1-v-8 Sharks series, though -- the Ducks should be taking a President's Trophy opponent very seriously.

What do the Sharks have going for them?  Probably everything else. 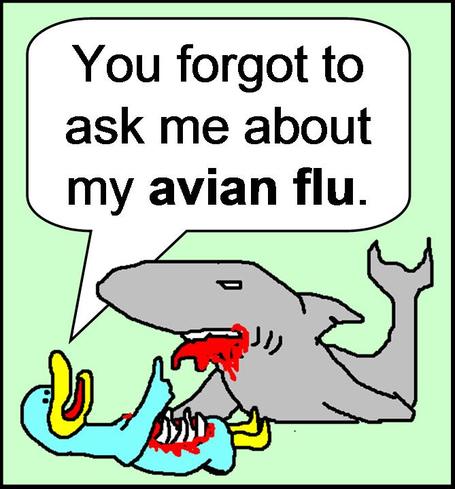 One thing's for certain -- both teams are playoff-tested (Anaheim's played 8 series since the lockout; San Jose has played 6), and neither figures to be ill-prepared for this Thursday's opener.  I'm pretty damn excited, folks -- at long last, a proper Battle of California.  Feel free to express your reaction in the comments. 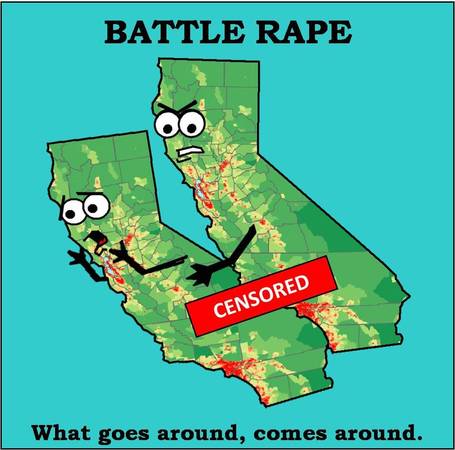 Now just to settle who's violating whom.