BoC Gameday—Will the Ducks be a speed bump or a roadblock on Shark Street?

Share All sharing options for: BoC Gameday—Will the Ducks be a speed bump or a roadblock on Shark Street?

Tomorrow night:
Anaheim Ducks (8th in west) at San Jose Sharks (1st in west)
Ducks lead series 1-0; JavaGeek Odds: SJS 52%
Go to Fear the Fin, where they have placed a ban on the word "annual".

Woo hoo!  Anaheim's not getting swept!

According to that JavaGeek link above, not only are the Sharks still favorites to win this series, but if not for goaltending, the Ducks would have lost G1 by a score of 3.1 to 1.2.  Even Coach Carlyle admits that Anaheim was "very, very fortunate to get the shutout and get the hockey game." If Sharks bloggers' responsibility is to preach calm among San Jose fans, I think it falls on me to remind Ducks fans to keep their cool as well -- we've seen this team blow a lot of leads this year, and while the Ducks did snag home ice advantage in G1, they haven't won three straight at home since mid-December.

Frankly, I don't know how many opportunities I'll have to post with the Ducks leading this BoC series. So I guess I should throw this in now: 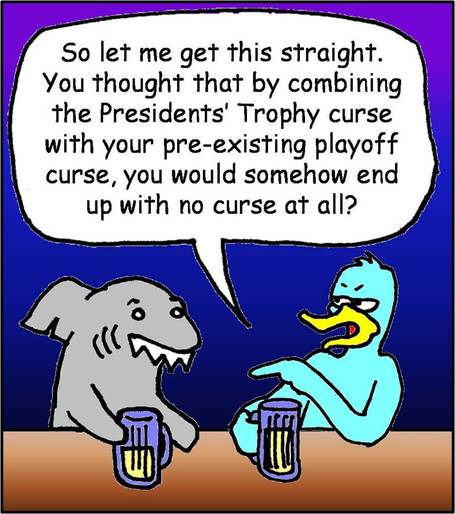 Drink up, hockey fans. It's April.

But that's not to say that I'm not on the verge of ecstatic; the Ducks can put an explosive oxygen tank squarely in the Sharks' mouth if they can duplicate a G2 miracle in San Jose.  In order to really take the edge in this series, Jonas Hiller and his pipes must stay rock-solid (and yes, Francois Allaire must be re-signed for sure), special teams must continue to deliver, and Anaheim needs to do its best impression of a disciplined team.

I'm posting a day earlier than usual -- partially because it's the weekend and partially because I'm awesome -- but I should be around for the full game tomorrow night, either in these comments or if there's a newer post.  Be fully prepared, Ducks fans -- usually when this team starts believing their own hype, they get demolished.  Feel free to stop by -- should be liver-threateningly drink-inducing.

Unrelated: One of the non-playoff storylines this spring is the Avalanche's search for a new general manager to replace ousted Francois Giguere.  My suggestion?  They should limit their GM hunt to candidates with the last name "Hiller".

Prediction: Say it with me.  Pronger gets booed.