Apparently Joe Thornton and Jonas Hiller played on the same Swiss  team during the lockout and became fast friends.  The author kind of argues that if not for Joe Thornton, Jonas Hiller might have never made it to the NHL, and would then not be in the position to play in this year's playoffs against those very same Sharks.  Isn't that crazy, San Jose?  Not only did Joe Thornton play like shit in game 1, but his actions might have brought in the single greatest destructive force to your playoff hopes.  That's funny, right?  I only have one thing to say to that:

The article also states that Thornton and Hiller spend every summer together in Switzerland and Joe stays in an apartment he shares with his Swiss girlfriend, Tabea Pfendsack.  Uh-huh.  That name sounds like Joe made it up on the spot.  Here's an exclusive picture of Tabea, courtesy of, uh, Johann Dicksturn: 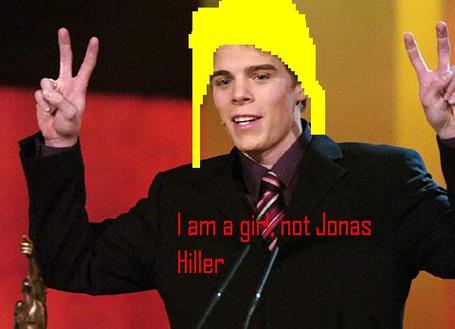