Share All sharing options for: Ducks Gameday—Five games to go, treacherous waters ahead

Anaheim Ducks (bubble) at Vancouver Canucks (above the bubble)
To get baptized in the church of LuonGod, go visit Nucks Misconduct.

Here's a SleekToon representation of the Ducks' upcoming schedule -- a game tonight in Vancouver, then a home-and-home with the Sharks, with both Nashville and St. Louis hot on our tail. 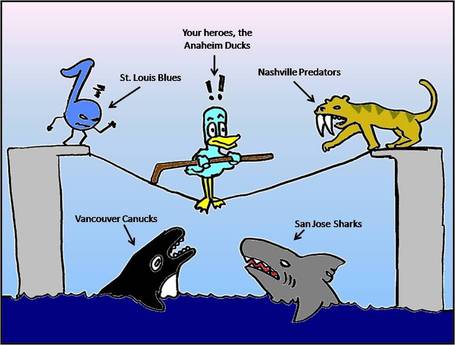 Bird on a Wire

Tonight's foe is the Sundinified Canucks, who haven't allowed a visitor to take a standings point in more than two months (eleven home games)!  They've held their last nine visitors to two goals or fewer.  The Canucks have plenty of reason to battle tonight, also -- they hold a one-point lead in the Northwest Division over Calgary, and failing that they have a zero-point lead over Chicago for home ice in the first round.  They won't be feeling charitable to the points-seeking Ducks, it appears.

It looks like it could be an epic game (it may not even be boring -- in the season series so far both teams are scoring 4.33 goals/game), which of course means that real life is requiring that I miss it.  Still, feel free to stop by in the comments and see if these late-charging Ducks can pull off another stunner, or if the weight of carrying one's own fate is too much for them (for the western bubble, controlling your own fate is like Hot Potato -- nobody seemingly wants it for very long).

Special side note to Chris Pronger:  Please pay special attention to where you set down your skates tonight -- don't want to step in any Keslers like last year!

Go Ducks (and for tonight, go Sharks and Wings)