Share All sharing options for: BoC Gameday—Insider tip for your 2012 playoff pools

San Jose Sharks (1st in west) at Anaheim Ducks (8th in west)
Ducks lead series 2-0, JavaGeek Odds: ANA 72%
Fear the Fin, where they are practically screaming about their lack of panic.

In two games thus far, the Sharks have launched 79 shots at Jonas Hiller; the Ducks have thrown 43 shots at Evgeni Nabokov.  Per JavaGeek, the Sharks by now should have scored 8.6 goals in this series; instead they've got 2.  Quite simply, the reason why Anaheim's making any first-round-splash at all is the inspired play of their playoff-rookie netminder.  The fact that Hiller's won either one of the games is stunning; the fact that he won them both is incredible.

But hey, incredible playoff debuts by an Anaheim goalie?  I wish I could tell you that was a rarity -- instead it seems to be a downright regular occurence.  I know two games makes a horrible sample size, but take a look at the single-playoff-year goaltending stats of the last three Anaheim netminders to make their postseason debut.

See the pattern here?  Every three years some new goalie gets trotted out in the high pressure of postseason and, at least so far, dominates.  And heck, the GAA for these playoff newbies keeps getting ridicuolously lower and lower -- at this rate, Anaheim's going to have some goalie who you've barely heard of make his debut in the 2012 playoffs, and his goals-against-average should be somewhere in the mid-0.60s.  You heard it here first.

In the two games, the Sharks have spent a full 24 minutes on the power play, compared to just under 11 minutes for the Ducks, and I'm hopeful that the penalty ratio shifts somewhat at home (let's say from 2-to-1 to maybe 3-to-2?).  Still, it's not a new phenomenon for Anaheim, that's for sure.  In 5 games against the Minnesota Wild in Rd 1 2007, the Wild had 51 minutes of power play to Anaheim's 33.  In 6 games against the Detroit Red Wings in Rd 3 of that year, the Wings had 68+ minutes of power play to Anaheim's 48+ minutes.  In terms of beating a capable opponent in a best-of-seven, giving them an extra period of power play time seems on paper to be a horrible strategy, but then again here we are. 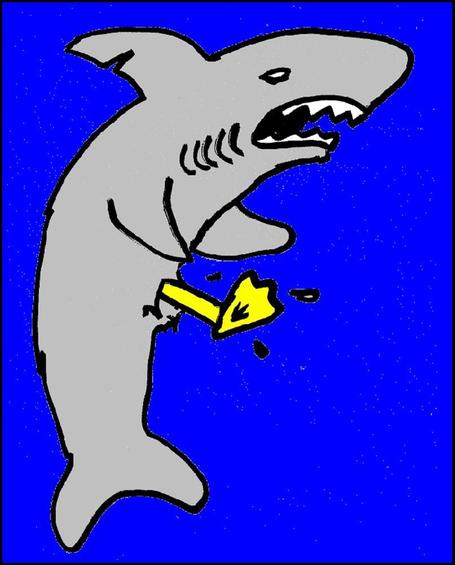 Of course tonight's game is a huge one, and yesterday's Rangers-Caps game is handy evidence of how quickly momentum can swing back to the higher seed.  For the first time in this series, the Ducks are a JavaGeek favorite to advance, but a loss tonight would probably push it back to a coin flip series.  Here's hoping the Ducks seize control, and you know what might be nice?  If the fellas won one for Hiller this time instead of the other way around.

Prediction: There should be enough visiting Sharks fans in attendance -- even at home, Pronger gets booed.