BoC Gameday—Counting on the Continued Wrongness of Monkeys and Forecheckers

Share All sharing options for: BoC Gameday—Counting on the Continued Wrongness of Monkeys and Forecheckers

San Jose Sharks (1st in west) at Anaheim Ducks (8th in west)
Ducks lead series 2-1, JavaGeek Odds: ANA 55%
Fear the Fin, which has changed its name back from "Fear the Win"

(Author's note: I was going to write a decent post last night, but instead I played host to visiting James O'Brien.  After playoff hockey was over, I introduced O'B to the wacky world of Mr. Show -- good times.  But as a result, I'm hurriedly posting this morning with a topic I've had in my back pocket for a few days.)

Back in the 2007 postseason, when I was a young, optimistic, and cupless blogger, I quickly discovered two trends that served as a quick litmus test of how the Ducks would fare in upcoming playoff series -- the playoff predictions of TSN's Maggie the Monkey as well as SBN's Forechecker.  While both prognosticators use wildly different approaches to their predictions (Maggie spins a wheel and Forechecker writes a prediction formula that weights results by recency), they do have one important commonality: ever since the Ducks changed their team name and uniform in the summer of '06, they both have picked incorrectly in every playoff series the Ducks have played.  Take a look at their Anaheim-related performance over the past two postseasons: 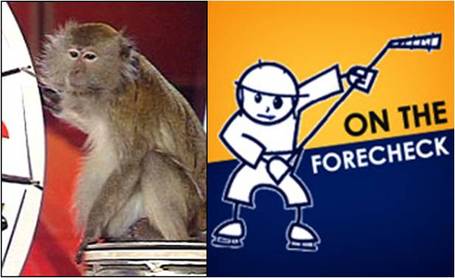 I've also included their picks for this year's first-round BoC series -- two potentially-damning votes of confidence for the Sharks.  Now I don't particularly want to bash either playoff predictor -- outside of their Anaheim picks I believe both have done very well with their methods -- but I did want to throw one more karmic log on the fire.

There are certainly several more practical and less simian-pick-dependent keys to tonight's game for the Ducks -- taking a lead, re-establishing the PK, keeping composure -- but these keys haven't really changed over the first few games of the series.  All three games thus far have gone into the third period tied -- if the Ducks can keep that trend up, then hopefully the power of the incorrect monkey and the misled Forechecker can push tonight's game in Anaheim's favor. 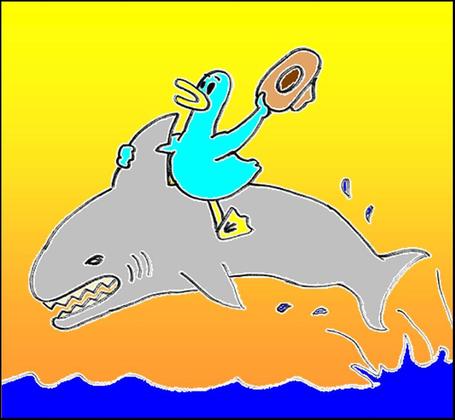 Unfortunately, Thursdays being the shitty-scheduled days that they are, I won't be around for the comments tonight,  Still, feel free to stop in and comment on tonight's pivotal G4, which will either give the Ducks a stranglehold on this series or will prompt a best-of-three series starting Saturday.

Mike's update 10:00: It's a bad schedule day all around for the BoC folks so I'm piggybacking on Sleek's post.

Fan analysis: keep doing shit well and skating hard. I know there's a mini-FTF/BOC meet up before the game and I wish I could join you guys. Hopefully everyone's still drinking buddies regardless of the outcome.