Well, as crazy as it sounds for a team that seemed a lock to miss the postseason just over a month ago, the upstart Ducks could put a finishing blow on the Battle tonight.  Certainly it's never an easy feat to win on the road in San Jose -- the Ducks had best bring their "A" game -- but they may have one really warped thing going for them.

As fucked up as this is, check this out: the Sharks have more regulation losses in 5 home games this month than they suffered in 38 home games over the prior six months.

The Sharks' one home win in April?  A scoreless game against the 15th-ranked Avs that was won in a shootout.  Yeesh.  I don't even want to attempt to explain the phenomenon, or really to assign any "choke" or "heart" labels to weakly describe it -- except for scoreboard, the Sharks certainly have seemed to be in control of the games -- but I sure as hell hope the trend continues for one more night, at least. 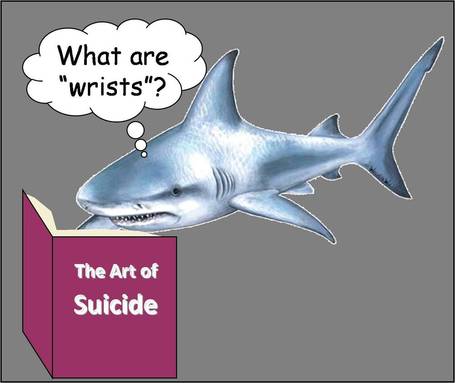 Adapted from the cartoon that helped me cope through inexplicably tough times.

I'll be in the comments tonight, but I'll be watching with James O'B (who is not shy about telling me how much he wants a G6 -- shut the fuck up, James) and another Ducks-rooting pal, so we'll play it by ear.