BoC Gameday—Four games to go, the circle is now complete

Share All sharing options for: BoC Gameday—Four games to go, the circle is now complete

Anaheim Ducks (bubble) at San Jose Sharks (atop the league)
Fear the Fin – where everything’s scarier in April.

How much progress can a team really make in nine games?  Ten games ago, the Sharks came to Anaheim and Omen’d the Ducks ("Omen’d" = to win 1-0 with the only goal going to Moen), and Spade and I figured the Ducks' chances were toast. Since then, however, the Ducks have stormed back to life, winning 8 of 9 games and scoring a whopping 37 goals, including 15 on the power play -- a tremendous 41.7% during that run.  Never mind that the Ducks haven't scored a goal against the Sharks since October 17 -- this offense is roaring.

The Sharks haven't been slouches since that game either, going 6-2-1, scoring power play goals in every one of their games (37.0%), and actually winning more regulation decisions over the stretch -- 5 to the Ducks' 4.  The Sharp-Toothed Ones are still plenty dangerous and hold a decent lead on the President's Trophy, despite injuries to key players (no Marleau this weekend, significant!).

And now this weekend their paths collide again for what should be a pretty intense home-and-home in what still could very much become a playoff preview (JavaGeek says the odds are 31%).  Both teams are playing well, both teams want the points -- break out the lightsabers. 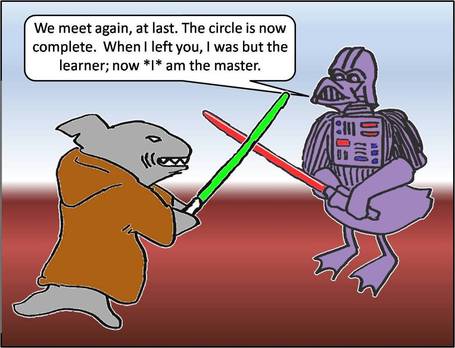 Duck Vader confronts Obi-Shark Kenobi after being left for dead in a volcano factory ten games ago.

The Ducks are right about one thing; this game isn't about measuring sticks; it's still about standings points, and Anaheim especially still need them.  Part of me hopes that the Sharks likely want Anaheim in the postseason, if for no other reason than to throw a significant speedbump to Detroit’s repeat chances. Since the lockout, the story of the playoffs has been a simple Choose-Your-Own-Adventure: (a) Detroit wins a Stanley Cup, or (b) Detroit gets eliminated by Chris Pronger.  But realistically, there won't be any mercy in these games -- it's likely to be a good old fashioned Battle of California.  Good fucking times.

A special "miss ya" shoutout to Sammy Pahlsson, who scored a couple of huge goals that directly helped the Ducks' playoff chances -- a game-winner against St. Louis and an opening goal against Nashville.  The Red Wings have been trying to shepherd all five Central Division teams into the playoffs by giving points away (probably to quell the old notion that the "Central Sucks" -- and yes, the Central and Pacific have seemingly switched roles in that regard), but at least Sammy's still watching out for us.  Now if Moen could just stop stabbing us in the back.

Update 11:45 AM from Mike: Just letting both sides know that Patrick Marleau won't play in either game. However, I can sense the fear in Ducks fans knowing that Tomas Plihal will be back tonight.

Go Ducks (and for today, go Blue Jackets and Stars).