Kings Gameday: More Like The Grate One, Am I Right? Hello?

LA Kings vs. Phoenix Coyotes (Five For Howling wants you as a friend) 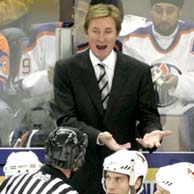 I can't hate Wayne Gretzky.  I want to; I mean, he looks like an old lesbian and he never stops complaining during a game, but I can't hate him.  He's Wayne Gretzky!  I watched him growing up and even before I was old enough to know what made him great, I still knew that he was awesome.  It's one of those things where you liked something as a kid and even though you now probably know better, you still can't help like that thing.  Like Limp Bizkit.  Fred Durst is comfortably in my top 10 most hated dudes* and I hate anything he comes out with, but when I hear "Nookie" I can't help but tap my foot because I liked it when I was a retarded 15 year-old.  I mean, honestly, that song's stupid as hell ("Stick it up your yeah!"... jesus), yet I still have a... connection?... to it because I used to like it.  It's weird, but that's how it is.  I have that same connection with Wayne; I hate everything he does as a coach, but I can't help but like the guy.

6.  Guy from the UPS commercials (get a fucking hair cut you smug son of a bitch)

One of my favorite stories at a Kings' game happened at Wayne's first game in LA as the Coyotes' head coach.  There wasn't much commotion about it before the game and nobody really mentioned that it was Wayne's first game back, but there was kind of an awkward feeling in the crowd, like people knew that they should do something for him.  Then, during the 2nd commercial break (I think), the Kings played a little video of all of Wayne's awesome moments and then put Wayne up on the Jumbotron, and there was this wave of applause that started in the rafters and worked its way down until the entire crowd was on their feet and applauding.  Wayne looked up, kind of confused as to why he couldn't hear his players talk, and then noticed that he was up on the Jumobtron and people were applauding for him.  He got sheepish, almost a little embarrassed, and quickly gave a thin smile and a wave of his hand, almost to say, "Thanks guys, but I'm kinda trying to do my job."  It didn't matter that he was coaching a rival; he was still Wayne Gretzky. 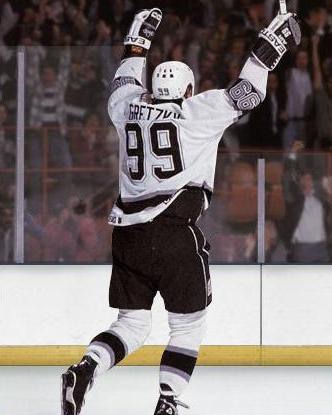 (Later, some drunk asshole yelled out, "Fuck you, Wayne!" and three people simultaneously responded, "Hey, shut the fuck up!" while some chick screeched, "Show some reeespeeect!"  It was hilarious.)

Wayne isn't a very good coach.  I think it's hard for him to express what he wants his players to do because a lot of what he did on the ice was so natural to him that he didn't need to think about it.  What does he say, "Alright guys, when you go behind the net you need to fake a wraparound to the point to draw the defender 13 inches to his left, then you quickly take the puck to your backhand and deflect the puck off his shin pad, try to hit him square but a centimeter or two is alright, and then the puck will deflect into the net?"  But still, I like him.  He's Wayne Gretzky; how can I not?

Prediction: A Coyote takes a penalty and Wayne makes a ridiculous face, Scottie Upshall gets put on his ass and reacts like a little pussy, and the Kings don't try.