BoC Gameday—Three games to go, Revenge of the Sequel!

Share All sharing options for: BoC Gameday—Three games to go, Revenge of the Sequel!

San Jose Sharks (still on top) at Anaheim Ducks (still in bubble)
Fear the Fin -- Sounds like a Selanne/Nokelainen fansite to me.

Another day, another excellent outing by the Anaheim Ducks -- who continue to disprove the importance of playing well for the first 70 games of the season.  The web-footed ones get to continue this anti-Shark points crusade this afternoon in Anaheim for the second installment of the home-and-home.  It's as classic a recurring battle as Wolverine and Omega Red, even: 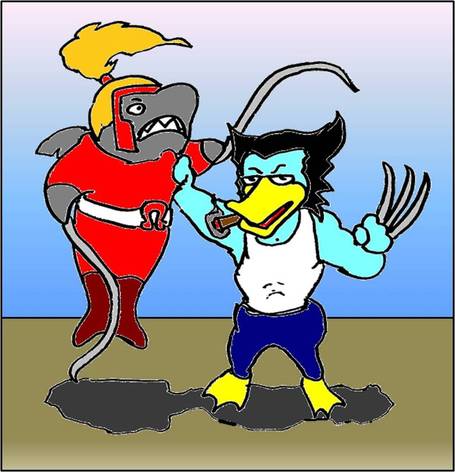 "Thanks for the two points, bub."

The cushion for seventh seed is gaining mass -- if the Ducks finish their season winning two of their last three, there's no way they can fall to eighth. And I don't even want to think about the possibility of sixth just yet -- for now, let's just celebrate the nutritional value of fresh shark meat, which is always tastiest in April.

I will be in the comments tonight -- feel free to stop by and marvel at Anaheim's mutant healing factor.