Well, I already mentioned this in the comments of this FanShot, but after submitting my Anaheim Ducks choices for Hart, Norris, etc. for James Mirtle's 30-team masterpiece, apparently some French-language blog has picked on two of my main choices (along with selections made for other teams):

Roughly translated through the power of the internet:

In Anaheim, I see badly how Bobby Ryan can surpass Ryan Getzlaf for Hart. Niedermayer long before Pronger for Norris.

So I guess it's time for me to do a bit of defending of my selections. I should start by saying that there's nothing wrong with selecting Getzlaf or Niedermayer for the respective awards -- there's certainly some very easy arguments to make for either All-Star (you probably don't have to go much past points totals).  However, as easy as it is to compare season scoring totals, as a Ducks fan I am much more interested in outscoring opponents, and that is where I feel Bobby Ryan has really excelled this year, enough so that I'm willing to give him team MVP honors. 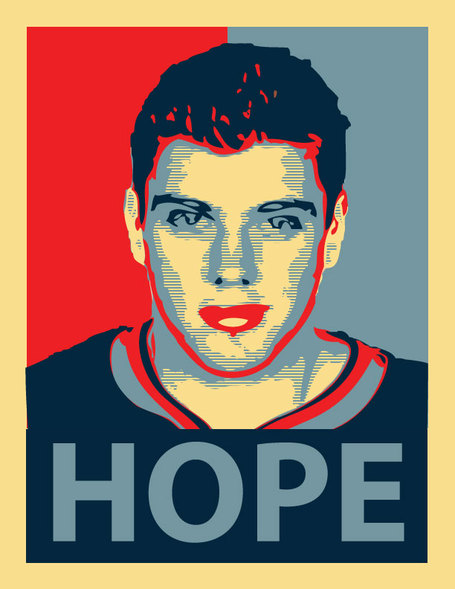 Image lifted from the artwork of Good Kyle.

There's a lot of number-crunching coming after the jump, if you're ready, with special thanks going to Vic Ferrari's 5-on-5 Head To Head Icetime site.  For each game, Vic's site tracks which teammates and opponents a player spends his 5v5 icetime with.  Let's take a look:

First off, let's take a look at Bobby Ryan's linemates over his 62 games-played this season. Sandwiched between two stints on the Getzlaf-Perry line, Ryan's been all over the map in terms of linemates -- notably I've color-coded his games played with Getzlaf/Perry (20), Ebbett/Selanne (17), Ebbett/Morrison (11), and Carter/Parros (5).  Avg Pct. means between the two linemates, what percentage of Bobby Ryan's 5-on-5 minutes did the linemates average?

Not a ton of stability for the kid, which makes his scoring this season even a bit more remarkable.  Using the breakdown in the table above, here's how Bobby Ryan's even-strength scoring rates (per 60 minutes) look with all four of his main sets of linemates. You'll note that in pretty much any linemate situation, Bobby Ryan's line was a significant outscorer at even strength -- especially it seems when playing with Ryan Carter and George Parros:

Just looking at the table, it's impressive to see -- no matter who Bobby Ryan gets lined up with, he's been delivering very solid outscoring results at even-strength.  Even when teamed with the black hole of productivity named Brendan Morrison, B-Ry was able to put in twice as many GF as GA.

Now just to bring in another angle, let's take a look at perrenial top-liners Getzlaf and Perry's even-strength scoring rates -- segmented by whether or not Coach Carlyle was utilizing a Ryan-Getzlaf-Perry line or not.

What I really want to emphasize in this table is the mediocre outscoring rates that Getzlaf and Perry have put up without Bobby Ryan on their wing; sure, they are putting up nice points totals and generating offense just fine without the kid, but a lot of what they are doing is being offset by some porous defensive numbers.  For sure, all three players' even-strength numbers improve in the games where they are played together, but unlike Getzlaf or Perry, Bobby Ryan is able to continue significantly outscoring his opposition without the other two guys.

Add to that the fact that Bobby Ryan has a slightly better power play scoring rate than Getzlaf or Perry (Ryan: 7.16 PP Pts/60, Getzlaf: 6.90 PP Pts/60, Perry: 5.32 PP Pts/60), plus he isn't nearly so prone to boneheaded offensive zone penalties, and I think there's enough ammunition to at the very least say that the Ducks' MVP isn't a Getzlaf slam dunk -- I think there's a strong case to be made for the new kid.

And finally, here's a quick rebuttal on their notion that Scott Niedermayer is the "bien avant" Norris winner on the Ducks.  For this, I just went a lot simpler, and just compared GF vs. GA when Pronger or Niedermayer was on the ice. 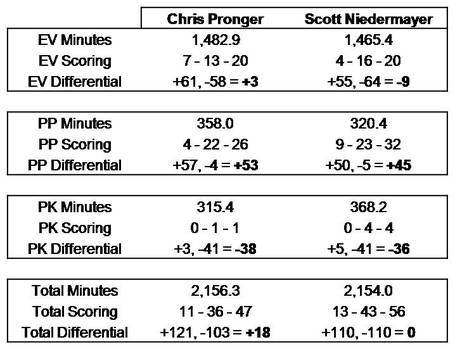 Both former Norris defensemen have played all 80 games this season, and in terms of total ice time are within 3 minutes-played of each other, and in terms of points totals, Niedermayer does have a sizeable edge.  However, Pronger's got the edge in terms of outscoring opposition during his minutes, which really made the decision for me.

In closing, I'll again reiterate that there's nothing wrong with picking Getzlaf or Niedermayer for these made-up awards -- both have been extremely valuable in key scorer's minutes throughout the season, and a quick glance at the team's leading scorers will confirm that.  However, this exercise was about team bloggers making their choice, and for me the notion of outscoring is much more important than the notion of scoring; I think my choices reflect that.

Feel free to shoot my theories down, tell me what I'm missing, or just tell me who would get your Anaheim Hart or Norris vote -- the comments section is open for criticism, I guess in whatever language you want.