(Author's note: I had drawn up the cartoons early for this post and had planned to write some more and publish it last night.  But then, in a totally decent twist of plans, I ended up drinking way too late with a pal in L.A. last night.  After a restaurant breakfast and a tired drive home, I'm not inspired to add too much right now, but I'll try to make up for it in the comments.).

Well, ain't this a doozy. As previously noted, the Anaheim Ducks have made the postseason seven times in their franchise history, and they've met up with the Detroit Red Wings five of those times. Each team has taken two series apiece, and now has taken two games apiece. Best of seven has wittled down to best of three.

And I couldn't be more pleased. Or more scared. Or more excited. If you told me two months ago that the uninspired Ducks would make the playoffs, knock off the Presidents' Trophy Sharks, and take a Detroit series down to a best-of-three, I would have advised you to sell your television for a few months.  And yet here we are, with any number of possibilities tonight -- who will be the hero?  who will be the goat?

The Ducks are 0-4 when Versus gets coverage in SoCal, and 6-0 when it's on a different channel.  Tonight we get the lucky-yet-painful Hayward; let's hope his productive-yet-irritating streak keeps up. 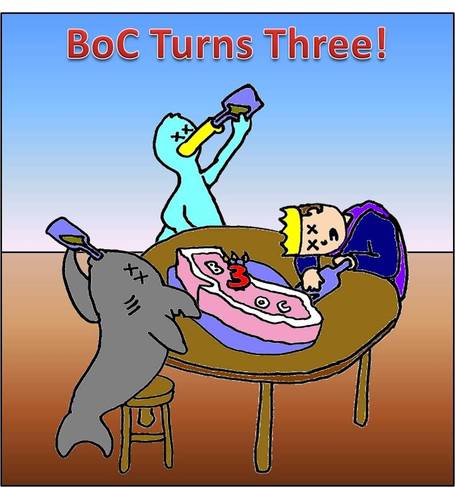 As I mentioned on the last gameday, yesterday was BoC's third blog birthday -- and again, thanks to all involved.  I've drawn up the cartoon above and shoved it in the right sidebar -- that should last another year, I think.

For those of you on a more traditional calendar, though: Happy Mother's Day.  And Mom?  Please stop reading my blog.

Prediction: At least one of the BoC teams gets their birthday wish.  And sure, Pronger gets booed.