Ducks Gameday—Ready or not, it's Game Seven

Share All sharing options for: Ducks Gameday—Ready or not, it's Game Seven

Game Seven -- it's a crazy, crazy experience that maybe only can be summarized by cliches: best players have to be the best players, time for a full sixty minutes, everyone will be laying it all on the line, and most importantly, anything can happen.

That last part is really what makes G7 special -- throw away the spreadsheets, forget about the season or even playoff stats, and basically just plan on being surprised.  Anybody can step up and be the hero, and anybody can blow it and be the goat.  Veterans can look like rookies, and rookies can look like veterans.  And even though by definition a G7 means that teams have been neck-and-neck so far (and full congrats to both teams for battling as they have so far), it doesn't guarantee that they'll stay that way for G7.

Sometimes G7s are epic -- down to the final buzzer -- and sometimes they are stinkers -- see PIT / WAS last night.  There's really no telling how teams will react to scoring or giving up the first goal, as everything has a new level of end-of-the-world urgency.  All I can hope is that somehow, when the fireworks of G7 are all over, the aftermath looks a little like this: 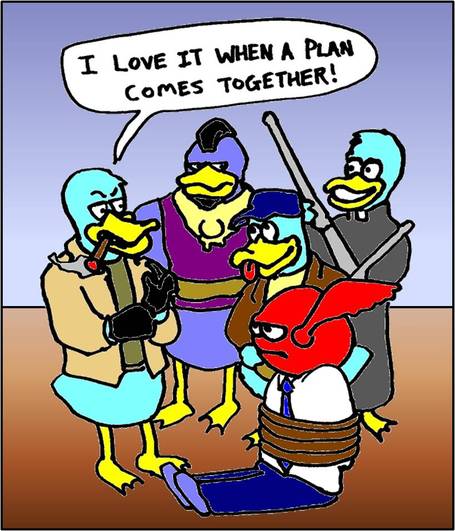 When push comes to shove, I always fall back on the A-Team.  They always seemed "clutch" in a jam.

Throughout these playoffs, Thursdays have always sucked for my hockey-watching habits. Because of the early start time today, I should be around in the comments for the first two periods at least, but assuming tonight's game ends before the fifth overtime, I'll be following the end of it on my cell phone.

Prediction: Captain Elbows gets booed (wait, I have to specify which one now?).  Afterwards, handshakes.  Who knows?  Maybe even Chelios will participate.