Lakers Game 7: There Is No Joy, Only Relief

Share All sharing options for: Lakers Game 7: There Is No Joy, Only Relief

The Lakers will probably win today.  They're at home, the Rockets are still missing their two best players, and I imagine the refs will be wearing purple and gold under their black and white's.  But there is no joy in a Lakers victory.  I cheer for Los Angeles in everything, which means I cheer for the Dodgers, Lakers, Trojans and Galaxy, to go along with my Kings obsession.  One might think that I enjoy cheering for the Lakers, since they're pretty much the opposite of the Kings, but for some reason I don't.  I think it's because you can't really celebrate a Laker victory because they're supposed to win.  There is no joy, only relief.  It's the same with USC; their games are boring because if they win, hey, they did what they were supposed to do.  For all the shit I give the Kings, at least I can savor their victories because they're usually not expected to win.

Of course, if it were the Kings that were always great and won all the time and everyone hated them, I would love it.  I think it's just because I only half-cheer for the Lakers that it annoys me.  I'm an underdog man at heart, and the Lakers are never the underdog.

The Lakers have had trouble dealing with the Rockets' speed, especially on the perimeter.  Derek Fisher sucks and can't guard for shit, while Shane Battier and Aaron Brooks have been nailing 3's all series long.  The Lakers need Pau Gasol to show up today, seeing as how he's 5 inches taller than everyone on the Rockets, but he's a little bitch so who knows.  Honestly, the only thing I really want is a fight between Sasha Vujacic and Luis Scola because it would probably look like this. 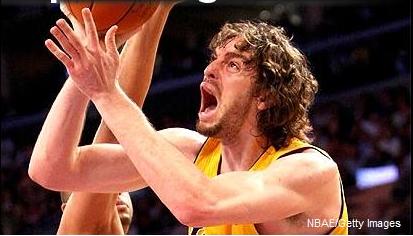 Anyway, this is a pretty big game so I thought it deserved its own post.  Plus, I wanted to show that picture.  God basketball players are so lame.