(Surprise, kids!  Sure, Ducks have been eliminated, but Rudy has set up a nice environment here for us miserable losers, and finally I can offer my first contribution -- a plug for a TV show I've been glued to.)

Outside of watching hockey, I have a few regular viewing habits -- one of them is that I'm a sucker for nature survivor shows. Now I'm no outdoorsman by any stretch, but I certainly enjoy watching other people battle the elements for basic survival necessities which I laughingly take for granted. On Man vs. Wild, Bear Grylls tackles nature head-on, and while his enthusiasm and techniques are great, he's a bit of a show-off -- he'll gladly jump into some quicksand to demonstrate how to wriggle out.  On Survivorman, Les Stroud has more of an "outlast" style -- he may go hungry for a few days, but he's done that plenty of times.  It is nice that he carries his own camera, though.  Both adventurers offer amazing locations and for sure fascinating shows, but their situations are robbed a bit of urgency -- by becoming career survivors, we're all too aware of how capable these guys are.  When they find food sources or shelter, it's cool but not crucial -- they've probably had it worse some other time.

Not so with the subjects of my new fascination, Out of the Wild: The Alaska Experiment. It's compelling as fuck.  Basic story: nine volunteers have agreed to spend a month-plus surviving a trek across the Alaskan landscape.  After three days of basic survival training, the group is dropped off in a remote location and must trek between a series of checkpoints, which range from a cabin to a crashed plane.  They must provide their own food, chop their own wood, make their own decisions, and see if they can make it out alive.  Nobody knows the distance they'll travel or the time it will take to complete.  Each member is given a GPS locator which, if activated, can summon a rescue helicopter and take them out of the game.  And best of all?  There is no prize for completing -- it's all about pride.

Now this is actually the second iteration of The Alaska Experiment, there was one last year where groups of people who knew each other tried to stick out a winter in fixed locations.  It also was pretty cool in that most teams were regularly fucked over and starving, but I think this year's concept is a bit more focused.  Everybody came into this group as a stranger, and they're all working together on a pre-routed trek.  The TV production can be a bit chintzy, but the effort on empty stomachs is damn real.  And the exuberation and relief when this ragtag group of self-proclaimed "city slickers" does nab itself a meal after days of futility?  That's real, dude.  Seriously -- they're going to live another day, against a lot of odds.  And every time it kicks ass.

Here's the team of volunteers that went in: 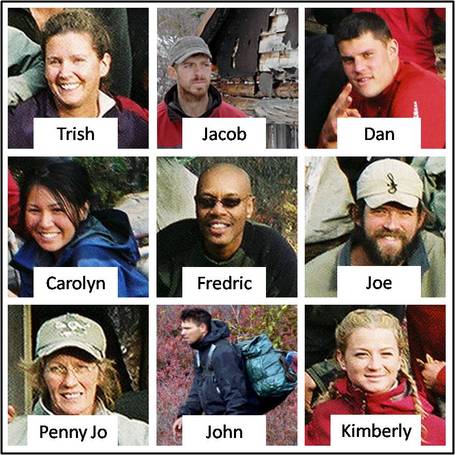 Nine volunteers started the experiment, and they're already down to five.

After the jump, a quick run-through of the volunteers and to give you a quick catch-up on this season, each person's claim to fame through the first five episodes (two and a half weeks of nature's ass-kicking).

The list of volunteers, and a brief claim to fame:

After five episodes, the group is down to five -- Trish, Jake, Carolyn, John, and Kim -- I truly am pulling for them, and I think they've got a shot.  It's really amazing to see how much they've improved in their efficiency even in two and a half weeks.  But it's pretty critical that all five continue; I don't think they can handle another dropout -- there's too much to carry and too much to constantly do.  It's a tight-and-cooperative group now, but as the show reminds us again and again, Alaska is un-fucking-forgiving, and survival is a round-the-clock effort.

So anyways, it's a show I've been enjoying, and if you're looking for a compelling ass-kicking drama tonight but would rather see Mother Nature play the role of Detroit and foolish volunteers play the part of Chicago, tune in to the Discovery Channel and catch the next Sleek-endorsed chapter of Out of the Wild: The Alaska Experiment.

Where survival is seriously in question.